Sugimoto America tested some of their teas for different nutritional compounds, and they have shared the results.

I think that it’s a good opportunity to discuss some of the findings. 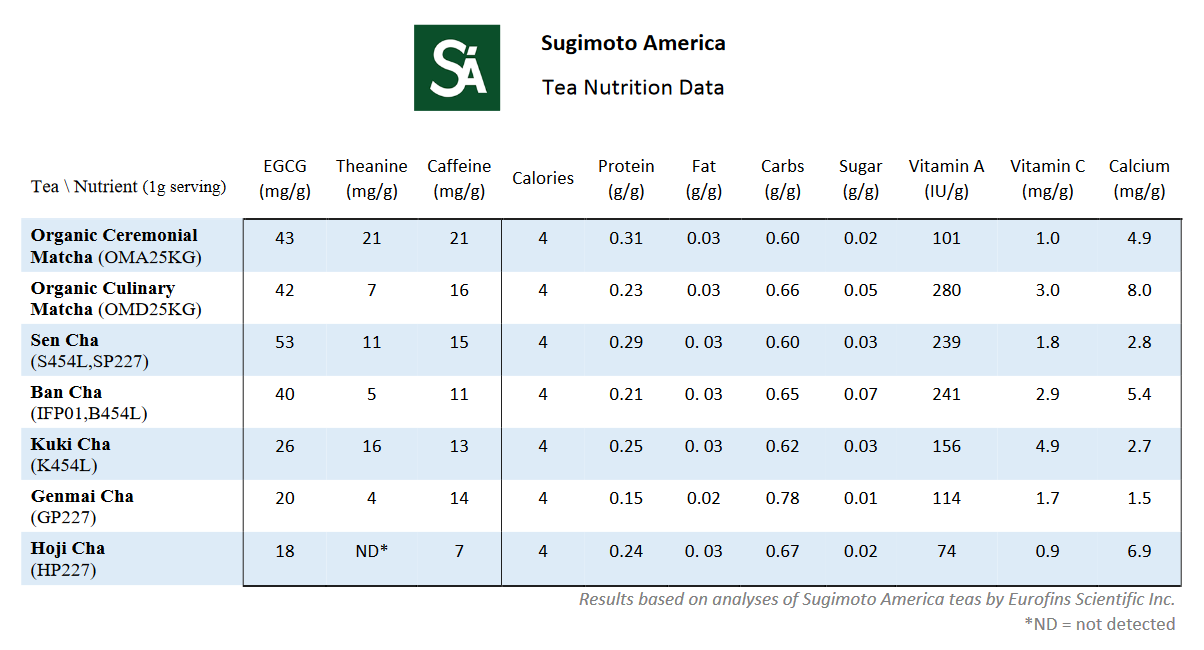 The chart compares one gram of each tea. Note that it’s not brewed tea.

Results can vary depending on many factors, but this can give us a general idea.

Let’s concentrate on EGCG, theanine, and caffeine. The rest of the values are very small, so they are not really significant for practical purposes, unless you want to eat 100 grams of tea leaves in one sitting, which I strongly advise you not to do.

A ceremonial matcha can have the same EGCG as a culinary one, and the lowly bancha may not be far behind.

This also makes sense in terms of taste. Having more catechins, although making a tea healthier, also make it more astringent and bitter.

It’s interesting that genmaicha and houjicha are both low in EGCG.

Genmaicha contains rice, which has no catechins so it’s no wonder.  In the case of houjicha, it seems that roasting has a considerable effect.

This results are also supported by a study in 2010, which is shown in page 9 of the Nihoncha Instructor course book, volume II. The higher the quality of sencha and gyokuro, the lower the catechin content.

Why are matcha and gyokuro shaded? To make a tea with a high amino acid content.

Tea leaves from earlier harvest also have more amino acids. That’s why a tea from the first harvest tastes better than the rest, and why sencha is more expensive than bancha.

In the case of matcha, a ceremonial one is made with a better harvest than a culinary one. Thus, the better matchas have more amino acids as well.

Genmaicha, houjicha and bancha are low grade Japanese teas. As you can see in the chart, they are also low in L-theanine.

As a side note, kukicha is high in L-theanine because stems are particularly rich in it.

Houjicha is pretty much a decaffeinated green tea

I haven’t been able to find the exact scientific explanation of why houjicha is low in caffeine.

It’s commonly said that the roasting process decreases the caffeine content. Another aspect is that houjicha is often just a roasted bancha, and bancha has low caffeine levels to start with.

The younger the tea leaf, the more caffeine it contains.

Finally there’s the aspect of the brewed tea.

Which liquid tea has more nutrients?

In this case matcha is the definite winner. You get pretty much all of what the dry tea contained.

In loose leaf teas, unless you ate the tea leaves, some nutrients remain in the wet leaves. Beta-carotene and vitamin E, for example, aren’t soluble in water so you can’t obtain them from an infused tea.

Matcha isn’t rich in nutrients just for being matcha, but for being a powdered tea.