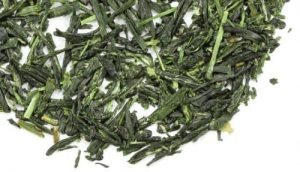 rally translates as jade dew) is considered to be one of the highest grades of green tea in Japan.

This high quality also comes with a high price, because gyokuro is one of the most expensive types of Japanese green tea!

Gyokuro has a dark green color, and when brewed it is slightly sweet, with a refreshing aroma.

How is gyokuro made?

The process to make gyokuro is very similar to sencha, the only difference lies in the cultivation method. At least 20 days prior to harvesting, the tea leaves are shielded from sunlight. Because of the added difficulty in shading, the production cost is higher.

The video below shows how the green tea field is shaded. The same process is used for both gyokuro and matcha.

What difference does shading the tea make?

The characteristic taste of green tea is due in large part to an amino acid called L-theanine. This compound intensifies the umami taste in tea and also adds sweetness to it.

As a side note, L-theanine is only found in some members of the Camellia genus (such as the green tea plant), the Boletus badius mushroom and the guayusa plant.

L-theanine is produced by the roots of the green tea plant and is then sent to the leaves. When light hits the leaves, L-theanine goes through a process which breaks it down to finally form catechin.

Catechin is a polyphenol that is responsible for green tea’s astringency. Although catechin is a powerful antioxidant with many health benefits, it must be balanced with L-theanine for an optimum taste.

With less sunlight, there is less photosynthesis. Therefore, there is less L-theanine being converted into catechin when the leaves are under the shade. This is why gyokuro is rich in L-theanine and why it has its characteristic taste.

The origin of gyokuro can be traced to the Yamamotoyama company. In 1835, Yamamoto Kahei (山本嘉兵衛) the sixth traveled to Uji to study tencha processing. It’s been said that the practice of shading the tea before the harvest was invented by Uji farmers in an attempt to protect the green tea leaves from frost by using straw umbrellas.

Yamamoto tried to replicate the results but ended with a different kind of tea, which nevertheless tasted great and became popular. He named it tamanotsuyu (玉の露).

How to brew gyokuro

Remember that gyokuro is considered a luxury even in Japan. You should take care to brew it properly so as to fully enjoy its flavor and aroma.

Use a small kyusu (Japanese tea pot: 急須), or if you want to take it one step further, there are two types of kyusu especially designed for brewing gyokuro: houhin (宝瓶) and shiboridashi (搾り出し). The other utensil you may need is a yuzamashi (湯冷まし), which is basically a container to pour water in order to cool it.

If you don’t have a yuzamashi, don’t worry. Just use something similar, like a mug. The yuzamashi is mainly used for aesthetic purposes. Check the video at the end of this post to see how the yuzamashi and the houhin are used.

First boil water in a tea kettle ( 100°C, 212°F) and then pour it into the houhin. This will lower the temperature of the water, to about 90ºC (194°F). Next, pour the water from the houhin to the tea cups (about 20 ml per cup, that’s why you should use small cups for gyokuro) and discard any remaining water. This way you’ve lowered the water temperature by another 10 degrees celcius, measured the right amount of water and warmed the cups.

The number of times that the water was poured was 4, which brings the temperature to 60°C (100°C-40°C) or lower. You don’t need an exact temperature, just something close.

Let brew for 3 minutes, and then serve into each cup little by little so as to have a uniform mix in each cup. It takes up some time but tasting the unique flavor of gyokuro is worth it.

I embedded a video (in Japanese, sorry!) so you can visually follow the process.

You may also find that some people pour hot water into the yuzamashi first instead of the houhin, etc. There is more than one way to do it but the results are the same.