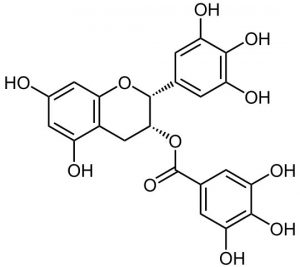 If you’re interested in the health benefits of green tea, then you must first learn about EGCG.

I want to explain to you what EGCG is in the simplest way possible. No chemistry degree required 🙂

Before we get into EGCG, we must first talk about catechins.

Catechins constitute about 25% of the dry weight of fresh tea leaf. They are a type of polyphenol, which is a chemical composed of many phenol structural units, hence its name. A phenol is just an organic compound with the chemical formula C6H5OH.

The characteristics and how many of these phenol structures are present in a particular polyphenol dictate it’s physical and chemical properties.

About half of the catechin content in green tea is EGCG, which is the reason why it is the subject of much research regarding the benefits of green tea.

EGCG as an antioxidant

EGCG is a potent antioxidant. An antioxidant is a molecule that inhibits the oxidation of other molecules. Oxidation reactions can produce free radicals. The two most important oxygen-centered free radicals are superoxide (O2−) and hydroxyl radical (·OH).

Although free radicals are formed naturally inside our bodies, they can cause reactions that end up damaging cells. In fact, high amounts of them may contribute to many diseases, the most important one being cancer.

Our organism has natural mechanisms to prevent or heal damage done by free radicals. One of them is by using vitamin C an E, which are also antioxidants. What’s great about EGCG is that it has an even higher antioxidant effect than those vitamins.

Green tea has more catechin content than other teas, thanks to the way that it’s processed.

However, different types of green tea have different catechin content. The top leaves (which are younger) of the green tea plant contain more catechin than the lower leaves.

To further complicate things, catechin content varies widely depending on location and amount of sunlight that the tea leaves receive.

People often ask which brand of green tea has more EGCG. It’s hard to tell exactly, because of the reasons mentioned above. Generally speaking, powdered sencha and matcha have more catechin because the leaf as a whole is consumed directly.

Please keep in mind that catechin is the source of astringency in tea (and bitterness to a lower degree depending on the type of catechin). Why is this important? Because too much astringency makes a tea almost undrinkable!

There’s a reason why gyokuro and high-grade matcha are expensive: They have comparably less catechins and more L-theanine. L-theanine adds a sweet taste, and improves the overall flavor of green tea.

What I recommend is to simply increase the intake of your preferred green tea, instead of sacrificing taste for the sake of catechin content. If you’re going to be drinking something often, you might as well drink something that you actually like, right?