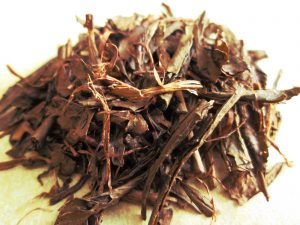 Houjicha is known to have lower levels of caffeine than other Japanese teas. It’s common for children to drink it in Japan because of this notion.

This tea is made by roasting green tea leaves (usually bancha) and although it looks, smells and tastes very different, it’s still considered to be a type of green tea.

Throughout the internet you’ll read that houjicha loses caffeine during the roasting process, because caffeine sublimes (changes from a solid into a gas) at 178°C.

I had seen such statements for so long that I didn’t even think of questioning them. However, when I wanted to find out exactly how much caffeine was lost, I couldn’t find a single study (either in English or Japanese) that explained it!

Thus, I looked into other options to see if I could figure it out.

One abstract from a Chinese university says that there was little difference in the quantity of caffeine in oolong tea for different temperatures in the roasting process. I don’t have access to the main text, so I can’t tell if the sublimation temperature was reached or not.

Another study about the industrial processing of yerba maté found that “caffeine loss (about 20%) in leaves mainly occurred during hot air drying, carried out in two stages, with inlet air temperatures about 110°C”. I’m guessing that it has to do with caffeine being dissolved in water and then being removed in the drying phase?

Finally, I read about roasting levels in coffee and their effect on caffeine. There is a change in the caffeine content, but it’s not a simple answer. The coffee bean changes density (it loses moisture and gains volume).

That means that you’ll get a different result depending if you measure by weight or by volume. A darker roast results in a bean that weights less, but it’s bigger. If you brew by weight it’s more caffeine (since you’ll need more coffee beans than for a light roast), if you do it by volume it would be less.

Anyway, the general consensus is that the change itself isn’t significant at the end, so the roasting process of coffee has no practical effect on the caffeine content.

I then looked at studies that measured the amount of caffeine in different teas. Unsurprisingly, houjicha has less caffeine than sencha and gyokuro. But here’s the surprise: It’s very close to the caffeine level of bancha, and in some cases it’s a little more!

In a study done by the National Food Research Institute of Japan, the percentage of caffeine as a percentage of dry leaf weight was measured for various teas, here’s a short summary:

Another paper by Tetsuhisa Goto, who also participated in the previous study, shows these results:

Note that these are averages, because each sample’s caffeine content differs. The general trend, however, is the same. Bancha and houjicha have a similar caffeine content.

This is interesting because houjicha is made from bancha, which means that houjicha starts out with less caffeine (as compared to other teas) even before the roasting begins!

There’s more caffeine in young leaves, as opposed to the mature leaves of bancha. Not to mention that bancha and houjicha have a good amount of twigs and stems, which are also low in caffeine.

My conclusion is that houjicha’s roasting process doesn’t play a big part in the amount of caffeine. It would be helpful if someone could share his knowledge with us on this subject.

Health Effects of Tea and its Catechins

The truth about caffeine and dark roast coffee