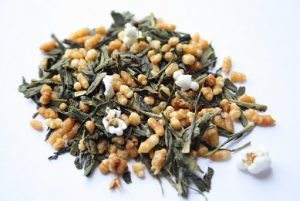 essentially a mix of green tea and roasted rice.

This blend balances the astringency of green tea with the nutty flavor of the roasted rice.

The Japanese consider genmaicha as a type of Japanese green tea and not an ordinary blend, perhaps because they have been enjoying it for quite a long time.

How is genmaicha made?

Sometimes matcha is also added to genmaicha, and its called matcha iri genmaicha (抹茶入玄米茶). Genmaicha with added matcha is easy to recognize because the roasted rice looks green!

The roasted rice, called genmai (玄米), is generally mixed with green tea in a proportion of 1 : 1, although this ratio can change depending on the manufacturer.

Genmai is also the word for “brown rice” in Japanese, but most of the roasted rice is actually made with white rice. Because both the roasted rice of genmaicha and brown rice use the same word, it’s a bit confusing.

Why use white rice instead of brown rice? Apparently, brown rice is not as fragrant when roasted and it becomes much darker than roasted white rice.

By the way, brown rice is produced by taking off the husk of the rice, so that normal white rice is just milled brown rice.

The traditional way of making genmaicha is by using mochi rice (もち米, mochigome). Genmaicha with 100% mochi rice has the highest quality.

Genmaicha is also made with common Japanese rice, uruchimai (うるち米). Sometimes, a blend of both types of rice is used.

The process to make the roasted rice has five simple steps:

I also wrote a post on how to make your own roasted rice for genmaicha, in case you want to give it a try!

What about the popcorn in genmaicha?

What looks like popcorn is actually popped rice. It used to pop frequently during the traditional roasting process.

Now with machinery having better temperature control, the roasted rice doesn’t pop as much, so it’s mainly added for a better look. Genmaicha is often made without it and the quality is the same.

Genmaicha doesn’t have an established history. One explanation about the origin of genmaicha states that it started when a man in Kyoto dropped his kagami mochi (a mochi rice cake used as decoration for the Japanese New Year) and didn’t want all of it to go to waste, so he took some small pieces and drank them with green tea.

Another possible origin for genmaicha may have been Korea, since Koreans have been drinking a tisane of roasted brown rice for a long time.

Eitherway, the idea of adding roasted rice became popular with the common people since it lowered the cost of tea. That is why bancha (which is cheaper than sencha) is traditionally used for making genmaicha.

How to brew genmaicha

Genmaicha is considered to be a low 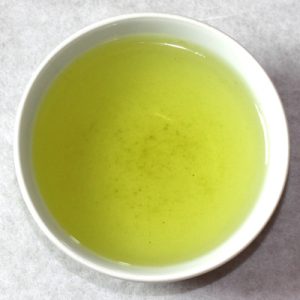 grade tea, along with bancha and houjicha.

Hence the brewing method is to use high temperature when brewing (as opposed to high grade tea like gyokuro).

Use 3 to 4 grams of genmaicha per cup and add to your kyusu (Japanese tea pot).

The following video shows a type of kyusu called dobin (土瓶). Pour 120ml of boiling water per cup in the dobin, and let brew for 30 seconds.

Now pour the genmaicha into each cup. Don’t fill the first cup all at once, alternate from cup to cup as shown in the video.

I encourage you to try genmaicha, it’s my personal favorite!