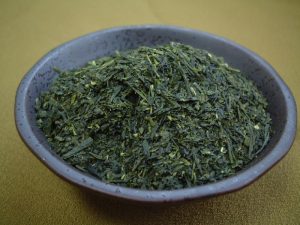 Fukamushicha (深蒸し茶, deep-steamed tea) is a green tea that is initially steamed for a longer time than what it’s considered to be usual. It’s commonly produced in the prefecture of Shizuoka.

Normally, the steaming process for green tea runs for about 30 to 40 seconds, and the resulting tea is called futsuumushicha (普通蒸し茶, normal steamed tea).

In contrast, fukamushicha is steamed for a minute or longer.

Another term, although not as common, is asamushicha (浅蒸し茶, light-steamed tea). This tea is steamed for less than 30 seconds.

What tea leaves are used in the fukamushi process?

Leaves from sencha, gyokuro, kabusecha and even bancha can be deep-steamed. When this happens, the name gains the fukamushi prefix, for example fukamushi genmaicha (深蒸し玄米茶).

However, most of the time it’s fukamushi sencha (深蒸し煎茶), and sometimes people say fukamushicha to refer to deep-steamed sencha.

By the way, tea leaves that undergo the kamairi process can’t be steamed, because they are already pan fried.

What are the advantages of deep-steaming?

The steaming process makes a big difference in the flavor of green tea. The main advantages of using the fukamushi process is that the astringency is suppressed, while gaining more body and sweetness.

The longer steaming time makes the leaves very soft, and during the rolling process the tips often break. This small particles make the fukamushicha look like if it was a lower-quality tea, but it really isn’t.

When brewed it also has a darker color, with sediments on the bottom. One would think that it’s a very bitter tea, such as funmatsucha.

The appearance of fukamushicha is a disadvantage, although as a bonus, the small particles means that the health benefits increase. How come? Just as  with matcha and funmatsucha, when drinking the small solid particles you’ll get more of the nutrients found in green tea (such as catechins), plus the ones that aren’t water-soluble like fiber, some vitamins, and chlorophyll.

Fukamushicha is also a little harder to brew.

If your infuser has openings that are too wide, the particles won’t be filtered. The infuser should also have a large surface area, because fukamushicha can quickly clog a surface that’s too small.

For this reason, it is recommended to use a kyusu (Japanese teapot) especially designed for brewing fukamushicha.

The fukamushi process became popular in the 1960s, which is quite recent. The starting point, however, is credited to Tozuka Toyozou (戸塚豊蔵) in the Meiji period.

Tozuka developed a rolling process by hand, which he refined and later proposed in a tea industry’s convention.

Until then, most of the green tea in Japan was made from steamed leaves that were dried in the sun. The rolling process greatly enhanced the taste and appearance of the tea.

As a result of those new standards, the variations in steaming time were studied as well. This led to the modern fukamushi process. 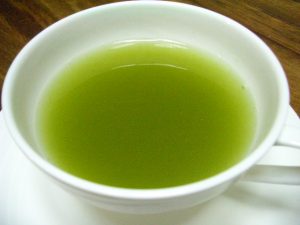 Fukamushi sencha is the most common fukamushicha. It’s brewed just like sencha, but with a lower steeping time.

Bring water to a boil. Then pour the water into the cups that you will serve. Your water will have cooled a bit after pouring.

Now place 3 grams of fukamushi sencha in your teapot. Pour the water from each cup into the teapot and brew for 40 seconds.

Now serve into each cup, little by little and alternating from cup to cup. That way each cup will have the same concentration of tea.