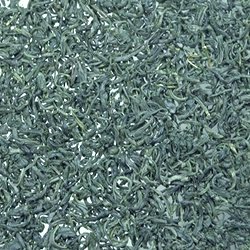 Kamairicha (釜炒り茶, pan fried tea) is different from most Japanese green teas in that it’s not steamed but pan fried, like the Chinese do.

It has a mild roasted flavor and aroma.

The two types of kamairicha

Generally speaking, there are two types of kamairicha:

Unlike steamed tamaryokucha,  the tea leaves are pan fried in this case. The cultivation and further processing is the same, making the tea leaves look curly at the end.

This tea is also pan fried but at the final processing the leaves are rolled just like sencha, so that it takes the familiar needle-shape.

Sometimes people will just say kamairicha to refer to either of the two types, so it can be confusing.

The best way to tell would be by the shape of the tea leaves. Anyway, pan fried teas produced in Japan only amount to about 5% of the total production, and out of that kamairi tamaryokucha is far more common.

The pan frying method first became popular in China during the start of the Ming dynasty, and even now is the preferred method of stopping the oxidation process of the tea leaves in Chinese teas.

The pan frying method by using the kama (iron pot) was brought to northern Kyushu by the Chinese in the fifteenth century. However, Japan later adopted the steaming method.

Nowadays, the pan frying method is considered to be rare in Japan. Please read the post about green tea history for more information.

There are 2 traditional ways to make kamairicha, and that distinction has come to be used as a tea brand for kamairi tamaryokucha in the respective prefectures.

Ureshino tea is made in the Saga prefecture, where the city of Ureshino is located. The traditional kamairi process involves a kama that is slanted at 45 degrees.

Check out the video below to see the pan frying of ureshinocha:

Aoyanagi tea is a product from the Kumamoto prefecture. The kama is a multipurpose pan, unlike the special kama used in ureshino tea. It’s placed parallel to the ground.

I’ve also included a video for you to see the different position of the kama:

Unfortunately, the traditional process has been largely displaced by the use of machines. I don’t think I’ve tried kamairi tamaryokucha made manually yet.

Kamairicha is brewed much like sencha, except that the water temperature is a bit higher, 90 °C (194 °F).

Since there are different types of kamairicha, perhaps it’s best to follow the manufacturer’s instructions for a higher-quality brew.