This was a tea factory tour courtesy of The World Green Tea Association.

Mr. Nishikawa (Manager) and Mr. Uchino (Senior managing director)  were kind enough to take me along.

We took a taxi from Shizuoka JR station. Our destination was Yamanashi Shouten (山梨商店), a tea wholesaler in Shizuoka city.

In Japan, it’s rare for a company to harvest, process and finish its own tea.

Aracha is already processed, but the different parts of the tea leaves must be sorted out.

Part of the refining process is the firing of the tea leaves. The goal is to have an intense aroma and a low moisture content for a better shelf life. 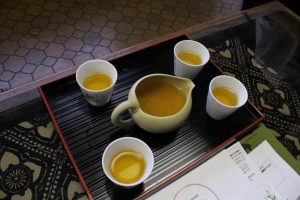 The owner of Yamanashi Shouten, Hiroyuki Yamanashi, first gave us a taste of a tea that he had developed: La Koucha (La 香茶).

I will go more into detail in the next post, but for now I’ll tell you that this is a new type of tea. Very unique, with a patent and everything. 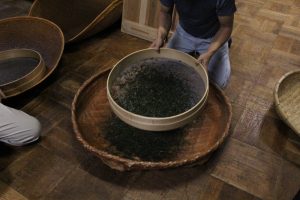 There were many technical terms being spoken at the tour.

I hope that someone can correct me, in case that I’m mistaken, with the following explanation about the finishing process for sencha.

Mr. Yamanashi first showed us how tea leaves were filtered with sieves in past times. 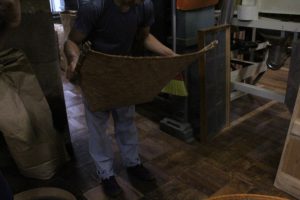 Besides the sieve, another tool is used: the hidashimi (簸出し箕), which is a sort of winnowing basket.

What it does is separate lighter and heavier parts with a throwing motion. 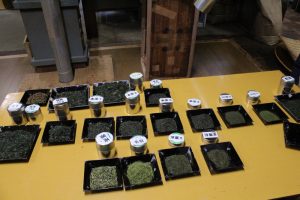 In the picture, you can see all the different parts that are filtered from aracha in order to make sencha.

There are two undesirable parts: fuwa (浮葉), very thin and light pieces, and keba (毛葉), a sort of fuzz from leaves, stalks and veins.

I’m not sure what the right word in English would be, I guess both qualify as tea dust.

If they aren’t filtered out correctly, in the firing process they will easily burn and cause a bitter taste in the tea.

Also, once inside packaged tea, they will clog the mesh filter of tea pots.

They can be used for fertilizer, or further processed to make konacha, tea bags, etc.

Some tea leaves are too large: atama yanagi (頭柳), so they end up being used for houjicha or genmaicha. They are essentially bancha leaves.

Another part that is filtered out is the stems and stalks, which become kukicha.

Finally, the tea leaves for sencha are called honcha (本茶). Out of one kilogram of aracha, about 872 grams are honcha. 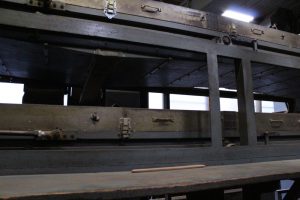 We then saw the machines used nowadays.

Some are basically very large sieves that shake themselves.

I heard that some of the leaves are cut to the right size, but I’m not sure if the same machine does it.

There’s a very interesting machine that uses electrical conductivity to sort out stems and stalks, since they have more moisture than leaves.

Another machine that does the same thing is the optical tea stem separator.

That’s the way that kukicha is made.

Then there is the firing machine.

Finally, we saw the blending machine, which is used to mix teas from different origin. 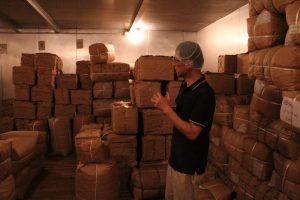 At the end we went inside the cold storage room, which is always my favorite part.

This was the end of my day with the World Green Tea Association, but I had more tea experiences in Shizuoka. I’ll share those in later posts.