Aracha (荒茶, crude tea) is a tea that has been processed (steamed, rolled, dried, etc.) but hasn’t been sorted yet.

The term aracha is used regardless of the cultivation process. For example, there is aracha from sencha and aracha from gyokuro.

Tea plantations sell their aracha to other companies (either directly or through a broker) that will in turn sort out the leaves from the other components such as buds, stems and broken leafs. The leaves are also graded for quality.

These companies will often mix the resulting tea leaves with leaves obtained from aracha of other tea plantations, and thus loose-leaf tea from most big companies is actually a blend.

Blending is for the most part unavoidable, because some tea plantations are too small to make their own brand of tea and some tea companies are too large to buy their tea from a single plantation. 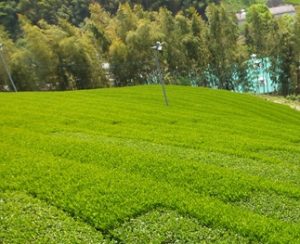 For us consumers there isn’t a lot of aracha options in the market, but it’s worth a try.

Aracha is special because it contains all the harvested parts (instead of only selected leaves as in most teas) from a single plantation.

Here’s my post about the process to make aracha.

Depending on the type of aracha the brewing method will vary, so it’s easier to just follow the guidelines in the package. For example, aracha from gyokuro is brewed like gyokuro: a low temperature and a long brewing time.

I believe that most aracha sold to the public is aracha from sencha, though.

In any case, I encourage you to try aracha and experience the flavor of green tea as a whole and not just individual parts of the leaf.