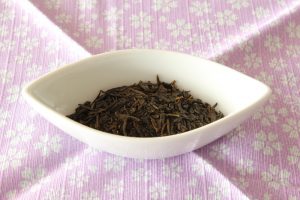 I obtained this sample from Yamanashi Shouten, which is the company that makes it.

But before I review it, let me explain a little bit about this new type of tea

La Koucha (La 香茶) is the name given by the company to a series of teas.

The reason it is a new type of tea is because of the patented process that the company calls “kaori exceed” (香 exceed).

This results in a tea with aroma components many times higher than was previously possible, without adding any artificial scents.

While the specific details aren’t mentioned, the most important part of the process involves extracting enzymes from tea leaves and then using them to oxidize the tea.

When I visited Yamanashi Shouten I tried the tea, but I didn’t get to see the tea leaves nor smell them when wet.

So after I came home I made a more thorough review.

The leaves are small and have a dark color, but not as black as a black tea.

What’s more impressive is the aroma. It’s definitely sweet, but not in the sense of a traditional Japanese green tea.

Since I don’t drink much oolong or black tea, I can’t confirm if the aroma is similar to a particular type of such teas. It doesn’t smell like any of those that I’ve tried so far.

The instructions are 2 grams of tea leaves, 100 ml of boiling water, and an infusion time of two minutes.

I will prepare it in that way, because I don’t think that it can be easily compared with another type of tea.

The wet leaf aroma is evidently sweet and fruity. It reminds me of soursop from my country.

One curious thing about the wet leaves is that they aren’t completely dark like those of a black tea. They have a green hue. 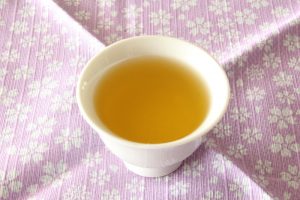 I like the appearance of the liquour. Its amber color makes this tea stand out.

In addition, the liquid has a notable aroma. More so than many teas.

Finally, I gave it a sip. Then another one.

It’s strange because it doesn’t taste of what it smells like.

There isn’t much sweetness as compared to the aroma. But it does have a long and aromatic aftertaste.

I found a light bitterness and astringency.

This is my guess: The tea needs boiling water in order to get the full aroma, but that high temperature also brings out some bitterness.

After that, I made a second infusion with the same parameters and it was equally as good.

I would have hoped that there would be more sweetness in the taste in order to match the aroma, but it’s just my preference.

Since I’m not very used to fruity aromas, it would be interesting to know what other tea lovers think about this tea.

But I’m happy for having the chance to review such a different type of tea.