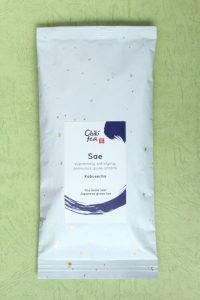 I had been in contact for more than a year with Holly and Alexander from Chiki Tea, but somehow we hadn’t talked about a tea review until recently.

Besides selling Japanese tea from their online store, Chiki Tea also has a tea house in Oita prefecture that serves an assortment of teas and food.

The tea for today’s review is Sae, a deep-steamed kabusecha from Kagoshima.

According to the product’s page, the tea is made of a hybrid between Yabukita and the Asatsuyu cultivars. Given that info, this tea’s cultivar must be Saemidori, hence the name.

The tea is also described as “handcrafted”, but there is no additional information about this. 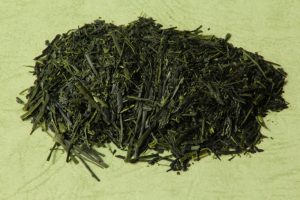 This tea comes in a 100 grams package. After opening it, I could feel a deep, creamy and sweet aroma.

It’s similar to what a gyokuro smells like, which makes sense because kabusecha is also a shaded tea.

As for the leaves, they are a dark green color and with a bit of luster.

There are many broken bits, just as with a fukamishi sencha. This happens because the deep steam results in leaves that are quite brittle.

For the leaves that aren’t broken down, one can tell that this tea has a good quality because they are smooth and tightly rolled.

I decided to brew it as a normal kabusecha in order to experience its intense umami, which is apparently this tea’s strong point.

If you prefer less concentrated flavors, however, feel free to brew this tea as a fukamushi sencha. It’s often a good idea to adapt a tea’s to one’s taste, don’t be afraid to experiment.

It turns out that since this is a deep-steamed tea it quickly dissolves into a strong liquor, it sort of pierced my tongue. So, I had to try again with less tea leaves and a bit more water.

After serving, I noticed that the wet leaves had a seaweed aroma with a slight sweetness. It definitely smells like a tea with a good amount of umami. 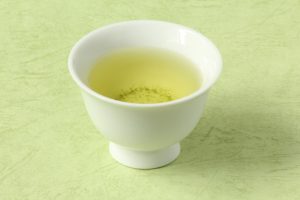 The liqour’s color is dark green-yellow, with some sediment at the bottom.

The umami flavor is high, it has a lot of body. I found it to be pleasant, just like savoring a gyokuro.

Regarding bitterness and astringency, I would say that they are present in just the right amount. There’s also a light sweetness in the aftertaste.

This tea can easily be re-steeped two more times with good results. I did a second and third infusion and the taste changes a little each time.

If the label said that this was a gyokuro, I would have believed it 🙂