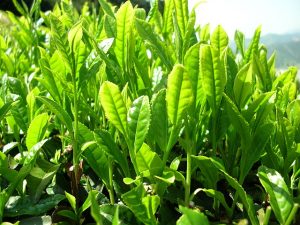 The Yabukita (やぶきた) cultivar is the most popular in Japan, no other cultivar comes close.

It covers 75% of the area of Japanese tea fields (data from year 2010) and 90% in Shizuoka prefecture, where it was developed.

In 1908, a tea breeder named Sugiyama Hikosaburō (杉山彦三郎) first took two samples from a tea field in what is now Suruga ward in Shizuoka city.

He then planted them in his testing field along with various samples. His goal was to see what tea plant performed better.

Years later, after being tested by the Shizuoka prefecture tea industrial laboratory, it was registered in 1953 as tea cultivar number 6. Later on, it’s cultivation was recommended for use in Shizuoka, and it slowly spread throughout Japan.

Characteristics of the Yabukita cultivar

This cultivar is resistant to cold weather, takes root easily, produces a good yield, and can be cultivated in different kinds of soil and climate. Best of all, its leaves have a strong aroma and a good flavor when made into sencha.

Thanks to the Yabukita cultivar, the Japanese tea industry managed to have consistent yields and offer an excellent tea.

Why is Yabukita still popular if it’s such an old cultivar?

The reason it became popular was that it solved a major problem at the time: frost damage. Nowadays tea plants can be protected with the available technology.

Tea plants take time (about 4 years) and money until their leaves can be harvested, and they remain productive for 30 to 45 years. So it’s no wonder tea farmers are reluctant to adopt a new cultivar.

The Yabukita cultivar spread quickly in the 70’s, when growing tea plants from cuttings became common (the standard way to propagate a cultivar). Before that, it was done with seeds, which causes natural variation in the plants.

Now, if you do the math, you’ll see that the day when those tea plants will need to be replaced by new ones is coming close.

I wonder what Japanese cultivars will become popular in the future.