Stay Clear is a powdered Benifuuki green tea from The Taste of Tea.

It’s one of the teas from the Functional Teas line. As its name implies, it helps reduce seasonal allergy symptoms because of its methylated catechin content.

The tea comes in a box, which includes 14 packets of powdered tea. It’s very convenient because you just have to dissolve the packet in hot water.

I opened one packet and smelled the tea powder. It reminded me of sencha, very fresh. 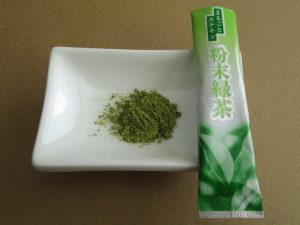 As you can see in the picture, the packet has a writing in Japanese. It says “whole catechin funmatsuryokucha“.

The powder is as fine as a matcha, although the color is not as vibrant. 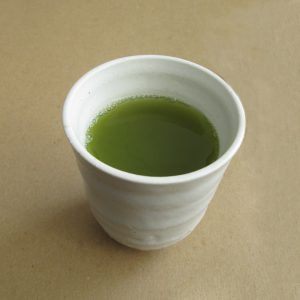 The liquid is dark, just like a fukamushi sencha. There’s a faint aroma in the liquid, it smelled a little sweet to me.

I tasted it and felt some bitterness and astringency, but not as much as I thought it would be. I’ve tried green teas that were more bitter than this, and they weren’t powdered.

This tea has a rich, strong flavor. I found it pleasant, although I’m aware that some people prefer lighter green teas.

Finding a Benifuuki powdered tea outside Japan isn’t easy. If you want to avoid the symptoms of pollen allergy, I encourage you to give Stay Clear a try.