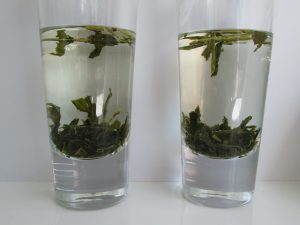 Making your own tea-infused liquor is very easy. You don’t need to add heat.

Why infuse tea in an alcoholic beverage?

Well, just in case that you want to drink it like that, or if you want to use it as a base for a cocktail.

What liquors to use

While there is no limit to the type of liquor that you can use, I recommend vodka and gin when you’re starting out.

Vodka has pretty much a neutral taste and smell. In other words, it’s easy to flavor. To top it off, it is transparent so your infused tea won’t suffer a color change.

Gin is interesting in the sense that it already has ingredients mixed in it. Gin cocktails with tea are quite common, so you won’t have a problem with finding cocktail recipes online.

As a side note, keep in mind the alcohol percentage of your chosen liquor. The higher it is, the easier it is to extract the tea’s flavor. Vodka ranges from 30% to 40%, and gin from 40% to 50%.

I looked at many sources and found different opinions about infusing green tea in alcohol.

While most people agree that one teaspoon of green tea should be used per 120 ml (4 oz) of alcohol, the infusion time varies.

There are claims that 4 to 5 hours are enough because it becomes bitter if infused too long, while other go to the extreme and choose 8 hours or more to fully extract the flavor.

Hence, I decided to experiment and tell you what I think is the ideal time.

First, I used a teaspoon of loose leaf bancha on 120 ml of vodka in a sealed container. You can leave it at room temperature, but I decided to keep it in a refrigerator because I prefer the cold liquor.

By the way, what we’re doing here is the same as cold brewing, which I wrote about in a previous article.

I left one sample for 4 hours and the other for 8, filtering out the tea leaves when each was done. 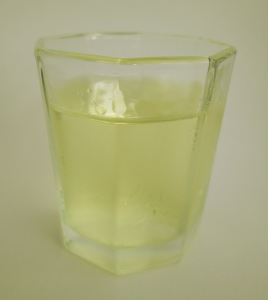 The 8 hour infusion was a little darker in color, but not significantly. As you can see in the picture, it is a pale yellow.

People often think that green tea has a green color, when in fact it’s yellow in most cases.

If you want a green color, try using fukamushi sencha or matcha (which is powdered so you only have to mix it, not infuse).

The aroma and taste were the same, I couldn’t detect a difference. Interestingly, I also didn’t feel much bitterness.

To tell you the truth, the vodka’s alcohol flavor is so strong that it greatly overpowers the tea. I’m thinking that more tea can be used, since it didn’t get bitter.

Hence I recommend to double the amount of tea leaves.

Update: I tested for two teaspoons and the result is much better. The color is more intense, there isn’t any bitterness, and I could even smell the tea’s aroma. The taste of the tea is also present, but as before, the vodka’s alcohol is so powerful that it’s hard to notice.

Add 2 teaspoons (8 grams) or more of green tea per 120 ml of alcohol. You can infuse for 4 hours if you’re in a hurry, but if you leave it for longer it’s alright. It won’t get bitter.

I’ll be experimenting some more, and will update this post accordingly.