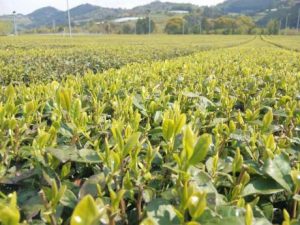 If you like to buy different Japanese teas online, you may have run across teas that are made with the “zairai cultivar”. What kind of tea cultivar is it?

Zairai (在来) means “native” in Japanese, and in tea it’s used to mean an old tea tree of no identifiable cultivar.

Not in the strict sense of the word.

Cultivars are essentially clones, because the tea plants are grown from cuttings (instead of seeds) so that the characteristics remain the same.

With zairai (sometimes also known as yamacha), each tea tree has very different traits because it came from a seed. They are all collectively known as zairai, but they aren’t really a cultivar.

Although only about half as productive as the bushes from the Yabukita cultivar, this trees are quite resistant to pests and have very deep roots. Their leaves have a higher mineral content, and teas made from these leaves are considered to be rare.

Very few zairai tea fields are left. If you look closely at the zairai tea plants in a tea field, you’ll notice that the leaves are different from each other in many ways: flavor, aroma, shape, color, etc. It’s considered a natural blend!

Unfortunately, this lack of uniformity in zaira’s aracha leaves usually results in a lower price when compared to aracha from established cultivars. It’s a shame, because it’s an incentive to erradicate zairai tea plants in favor of popular cultivars.

The only way to experience the taste of tea in old Japan, is to drink one made from a zairai tea plant. It’s a historic asset that will hopefully be preserved forever.

I encourage you to try it!