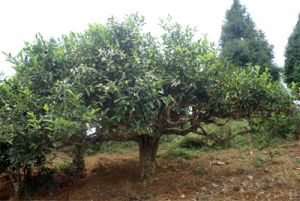 It’s common knowledge that the tea plant comes from China.

As mentioned in the post about history of green tea, there was a cultural exchange in the Nara and Heian periods between Japan and China due to Buddhism.

There are written accounts of Japanese monks traveling to China and then bringing back their knowledge of tea, as well as the tea plants themselves.

The problem is determining the date of when the first tea plant came to Japan, because maybe it did so before the written accounts.

Yamacha differs from Japan’s commercial varieties, and it appears to have been growing for hundreds of yeas. Its leaves aren’t uniform in shape and size, which is another evidence that yamacha hasn’t experienced the continuous selection process by tea farmers.

Yamacha is found close (about a radius of 2 km) from human settlements and farmland. Outside those areas there aren’t any yamacha plants. This means that yamacha had been cultivated in the past, although it doesn’t give clues about its origin.

What the studies say

One study led by professor Hashimoto Minoru stated that probably yamacha tea plants were secretly cultivated during the Kamakura period (1185–1333) in an effort to avoid the high taxes imposed on green tea farmers, and they have remained hidden until now. Hence yamacha isn’t so ancient after all.

Another study in 2002 with DNA analysis concluded that it’s highly likely that yamacha and the modern Japanese cultivars share the same origin.

For more information about tea plants of no identifiable cultivar, please read my post about zairai.

In other words, China is still the motherland of tea, including Japanese tea plants 🙂

Nevertheless, some small tea companies in Japan have been using yamacha and are even cultivating it right now. There’s value in being different.