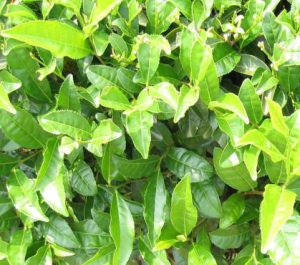 Okumidori (おくみどり) is a Japanese tea cultivar that while not as popular as Yabukita, it does have many adepts.

The Okumidori cultivar has leaves with an elliptical shape similar to Yabukita, but a bit smaller.

Although intended for sencha,  it is now also being used for matcha and gyokuro.

It’s a late-budding cultivar, taking about a week longer than Yabukita before it can be harvested. The advantage of this is that Okumidori can resist frost that happens at the beginning of spring.

Okumidori was developed in Shizuoka prefecture. It is a hybrid between Yabukita and a native tea cultivar called “Shizuoka Zairai #16″ (静岡在来16号).

In 1974, it was registered as tea cultivar #32. It makes a high-quality sencha and the yield at harvest is very good, much like Yabukita.

What about the taste of Okumidori?

When made into sencha, it is of mellow taste, astringency isn’t high and the fragrance is refreshing. The liquid’s color tends towards pure green. In other words, the yellow hue isn’t so strong.

This is a well-rounded tea cultivar with no serious flaws. In fact, Okumidori is sometimes criticized because it doesn’t stand out as much, it’s quite similar to the Yabukita cultivar. They are often blended, which proves the point.

Another small shortcoming is that Okumidori’s aracha tends to have stems that are too white. It doesn’t look good according to Japanese standards, perhaps it looks like it has more stems that usual?

Anyway, I found some articles about steps that can be taken to to minimize that (like harvesting a few days earlier), so maybe it’s not a big problem nowadays.