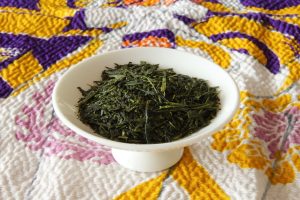 Honoka is the name of a fukamushi sencha sold by Tea Company Sayamaen.

It’s made with the Yabukita cultivar, and comes from Iruma city (入間市), Saitama prefecture.

Note that tea from Saitama prefecture is well known in Japan, and it’s called Sayamacha (狭山茶).

This particular tea has gone through a process called Sayama hiire (狭山火入れ, Sayama firing), which gives it an intense aroma and a characteristic taste.

The firing step is always done in the refining process of sencha. Basically, a good firing enhances the tea’s aroma, but if it’s too strong it will be roasted instead.

It turns out that because Saitama prefecture is at the north of Japan, it’s colder than other tea producing regions.

As such, the first harvest occurs much later. On top of that, the possible number of harvests is lower, no more than two.

According to what I’ve researched, the lower number of harvests and the fact that the leaves grow slower on cold temperature means that a thicker tea leaf can be picked and it is still of high quality.

The thicker leaf can resist a stronger firing process, and that is what Sayama hiire is.

There’s a tea picking song from Saitama prefecture that mentions the following:

“Shizuoka for color, Uji for aroma, and Sayama for taste which delivers the finishing blow (色は静岡、香りは宇治よ、味は狭山でとどめさす)”.

As you can see, the tea farmers from Saitama prefecture are very confident of their tea’s quality 🙂

My first taste of Sayama hiire

The first thing that came to my mind as I opened the package was that this tea is very fresh. At this point I could already tell that it’s a high quality green tea.

It has a deep and sweet aroma, very much like a shincha or a gyokuro. 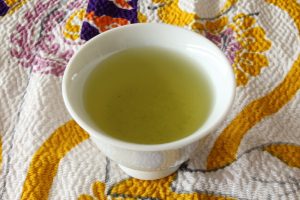 The liquor was yellow with some green too. As all fukamushi sencha, it wasn’t a clear liquid and had some sediment.

I was surprised by the sweetness of the aroma in the wet tea leaves.

Of course, it still has the seaweed component as most Japanese green tea does. It was very pleasant and fresh.

I drank it and noticed a powerful umami flavor. It’s a good quality green tea, similar to a gyokuro, the flavor was bold.

The sweetness is evident, and it’s not bitter nor astringent. What else can I say? It’s a very good tea.

I made three more infusions, lowering the infusion time a bit. The results were great.

Each time the color became darker but it didn’t get any more bitter.

To understand this tea better, I decided to taste it again using one minute of brewing time. Amazingly, the bitterness wasn’t there and the astringency was very subtle, enough to make it interesting.

This year I’ve been drinking more fukamushi sencha, perhaps because I visited Shizuoka.

After the last two tea reviews, I’ve become a fan of this type of green tea.

I encourage you to give Honoka a try, I liked it a lot. You can contact the Sayamaen Tea Company at the following email address: ippuku@jcom.zaq.ne.jp

They have international shipping.