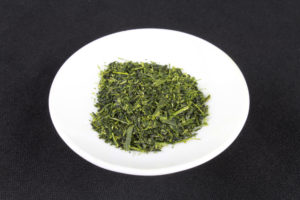 I received this sample from Sugimoto Tea.

It’s not on their online tea store. Single cultivar sencha is something that they’re trying out with their wholesale clients.

Asatsuyu is a very interesting cultivar. It’s often called “natural gyokuro” because it has a high umami flavor without the need of undergoing the shading process like gyokuro does.

I had tried a tea from this cultivar so many years ago, that I honestly don’t remember much. That’s why I’m happy to get the chance to taste it again 🙂

Tasting Asatsuyu for the second time

To be more precise, this is a fukamushi sencha. It’s easy to tell because the tea leaves are broken down into tiny pieces.

The leaves have an intense green color, it’s a good sign.

But the best thing so far is that the aroma of this tea is richly sweet and creamy.

The package doesn’t say much about the tea, but I think that it’s from a first harvest. Because it smells like shincha or a good gyokuro.

The wet leaf aroma is not as intense as I would have imagined. I’ll describe it as slightly sweet and fresh, with hints of seaweed. 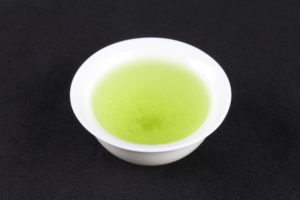 I served it and enjoyed its wonderful green color.

It was a bit darker than you see in the picture, because by the time I took it the sediments had collected at the bottom.

And at last I took a sip of this green tea.

I’m not sure how to describe it, but I feel that it has a deep taste. And it isn’t astringent nor bitter. Not very sweet either.

I then made a second infusion, but for 20 seconds.

The liquor became greener. While the umami taste had diminished, it still had no bitterness and astringency.

For the third infusion I infused for only 10 seconds.

It tasted like a normal fukamushi sencha. Still quite good.

The fourth and last infusion was in boiling water, no longer than 5 seconds.

Amazingly, the green color was just as strong. Another good cup of tea that wasn’t astringent nor bitter.

I can’t say much more about this tea, except that it’s excellent.