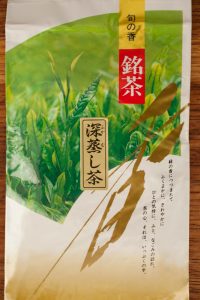 After my podcast with Reina Sakao of Sakao Enterprise, I was fortunate enough to receive a variety of tea samples from her store. Thank you Reina!

The first tea I’ll review is a Fukamushicha from the Shizuoka prefecture. If you’re not familiar with it, fukamushicha is basically deep-steamed sencha (also called fukamushi sencha).

By the way, Shizuoka specializes in fukamushicha, so it’s a good place to start if you’re new to this type of Japanese green tea. 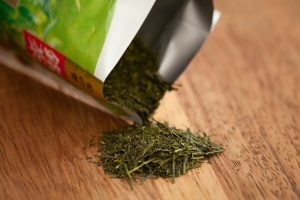 I opened the package to take a look at the leaves. You’ll notice that they are broken and there are a lot of small bits. This is how fukamushicha leaves look like, because the deep steaming makes them very brittle.

The aroma of the leaves surprised me. It was very sweet. I thought it was similar to sugarcane, unlike other fukamushichas that I had tried before.

I compared it with different gyokuro teas that I have, but none had this feature. This is indeed a high-quality tea in regards to smell!

Of course, it also has the familiar grassy/vegetable aroma of sencha as well. It makes you feel that it’ll be very refreshing. 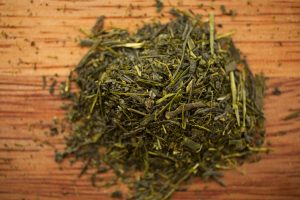 Although in Sakao Enterprise’s website the brewing time is 1.5 to 2 minutes, I prefer just 40 seconds for fukamushicha (as many Japanese tea companies suggest too).

After steeping, the resulting liquid is dark green, with sediment at the bottom because of the fine particles.

Now the aroma has changed, it’s a very faint sweetness with mild grassiness. I found it quite pleasant. 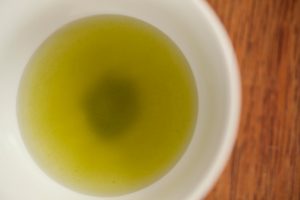 This tea has more body than a normal sencha. In my opinion, there’s low astringency and medium bitterness, plus a slight sweetness.

I enjoyed it, it’s great for people that like green tea a bit on the stronger side, but without going into a lot of bitterness.

If you brew it for longer, you’ll get an ever darker green color (almost no transparency) and the flavor becomes more intense. You can try it this way as well, to see if you like it or not. It basically depends on how much bitterness you can take 🙂

You can easily steep this green tea more than twice and still get a good flavor out of it!

If you’re interested, I’ve included a link to this fukamushicha on Sakao Enterprise’s product page.