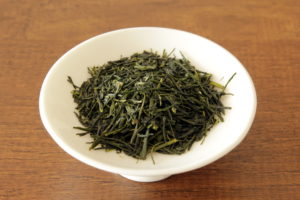 While some green teas are often aged at low temperatures, the aging doesn’t last so long.

It’s a fukamushi sencha made by Imayoshi Seicha, a tea company located in the city of Kirishima, Kagoshima prefecture.

This sample was given to me by webexpoo.com. I thank them for letting me review this interesting tea 🙂

It won a “fine product prize” at the 2015 Nihoncha Award.

Finally, it is of the Saemidori cultivar.

The tea leaves have a sweet and creamy aroma. It’s sort of faint, but very pleasant.

Even though it is a deep steamed tea, the tea leaves have a great appearance. They aren’t broken down at all and look thin, with an intense green color.

In other words, this tea has such good quality leaves that it will surely taste good no matter if it’s aged or not.

The wet leaf aroma was marine, fresh and mellow. 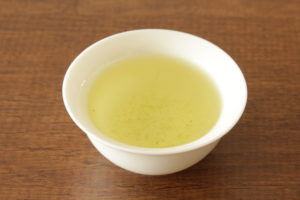 After I poured it, I could see a green liquor with some precipitates.

I can’t help but imagine if the farmer had thought back then that someone like me would be publishing a review about this tea in the future.

But let’s concentrate on this tea tasting.

I found it to be rich in umami and some sweetness. Overall it feels very smooth.

There isn’t bitterness nor astringency, and it also offers a lightly sweet aftertaste.

It feels aged, in the sense that the usual sharpness of the vegetal tone isn’t present.

I steeped it again with the same parameters and found a bolder tea, even the liquor had a darker color.

I thought that it was a very good tea as well. It was easy to drink.

Then for the third infusion, which again I prepared in the same way, there wasn’t much umami flavor left but it was enjoyable, although a bit light.

I could tell that the fourth infusion would be the limit. So I just used boiling water for 15 seconds.

I can tell you that it is a very good tea. And also quite unique.