Making your own homemade mouthwash is easy and inexpensive.

I did some research online, and concluded that it was best to use water and baking soda as the main ingredients.

Baking soda, or sodium bicarbonate, is used in some commercial mouth washes and even toothpaste.

Halitosis (bad breath) is usually caused by anaerobic bacteria, since they release volatile sulfur compounds (VSCs) as they break down food.

Baking soda can balance the pH in your mouth, so that fewer of these bacteria can thrive. In addition, it has a deodorant effect.

Many commercial mouthwashes use alcohol, but it can dry your mouth (potentially causing more bad breath later on). That’s why I decided against it.

Also, the use of a highly effective antibacterial compound will kill all the bacteria (even the benevolent ones). There’s no need to be so radical when dealing with your mouthwash 🙂

I tried the mixture of water and baking soda as a mouthwash, but the problem I had was that it doesn’t taste well. It’s pretty bland by itself.

Good news is, you can use green tea instead of water! Brewed tea is made up mostly of water anyway, and it has antibacterial properties as well.

A study in 2008 discovered that green tea was effective in removing VSCs. In contrast, sugarless gum, mints or parsley-seed oil had little effect. However, this effect is only temporary because no reduction is observed one hour later.

In my case, I used bancha leaves and brewed them in boiling water for a minute. It doesn’t matter if it’s a bit strong, since you’re not going to drink it.

You can use any green tea you want. I just opted for bancha because it’s not expensive.

Once it cools a little, add 1 teaspoon of baking soda. You’ll see that the color changes, becoming darker. 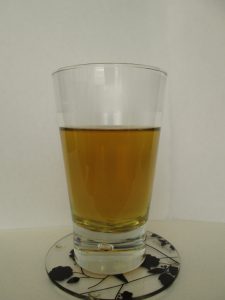 The last step is optional. I decided to add a bit of ground ginger for an improvement in taste and also because of it’s antibacterial properties.

If you want to make a larger batch, it will last for at least a month in a sealed container.

As always, consult with your dentist. Halitosis can have many other causes, so it’s best to talk to a specialist first.

Finally, if you worry that this mouthwash may stain your teeth (as green tea can possibly do), just flush with water afterwards.

A review of the current literature on management of halitosis

Dentifrices and mouthwashes ingredients and their use