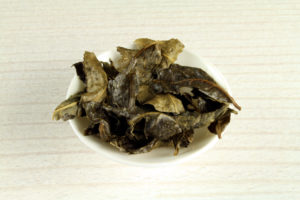 This is one of those tea samples that for some reason I didn’t review quickly, so I forgot about it until now.

Boke Bancha is a regional bancha that comes from Tokushima prefecture.

I consider this tea to be relatively rare, I couldn’t find an online vendor that would ship outside Japan.

The sample I have has no additional information regarding this tea’s origin. I don’t know who produced it.

It’s not the complete tea package, just a small amount meant as a sample. My friend Noli Ergas gave it to me from his trip to Japan.

The tea leaves are similar to Awa bancha, which comes from the same prefecture.

They are unrolled and have a dark color on one side, and a light one on the other.

I’m not sure how to accurately describe the aroma.

It’s not vegetal nor fresh like many Japanese teas. Definitely not a marine aroma.

I think that it’s similar to some Chinese green teas that have notes of legumes, but the intensity is very low.

There’s also a faint sweetness, and a slight sour note.

I couldn’t find information regarding the correct way to prepare this tea, so I’ll just prepare it as a normal bancha.

Again, I feel a faint sourness in the aroma of the wet leaves. Like if it was slightly fermented.

While it’s much different than Awa bancha, it’s not at all like a standard bancha.

The liquor has a deep yellow color. 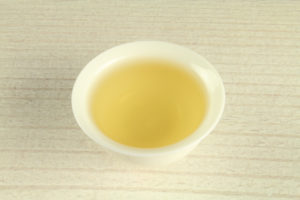 It’s a light flavor. Some sweetness, and no bitterness nor astringency.

Not much umami flavor either.

The most noticeable aspect to this tea is that the throat feels very dry after drinking it. It’s the first time that I feel it at this level.

Other than that, the tea is quite easy to drink.

I made a second infusion with the same parameters.

The resulting color was lighter but very similar in taste.

For the third infusion I decided to get all the flavor out, because this tea looks like it doesn’t make much infusions.

So I used one minute of infusion time.

The color was also light, although the flavor was a little stronger.

An interesting tea with a unique flavor.