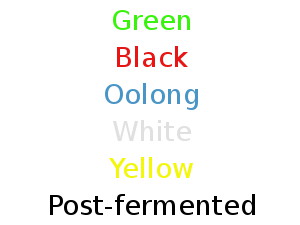 Did you know that what we call black tea is known as red tea in Asia, and that there’s also blue tea?

On  a previous post, I wrote about the types of tea: green, black, oolong, white, yellow, and post-fermented. However, those colors only apply to western countries.

The Chinese classification is also used in Japan, and as far as I know, Korea. Because tea originated in China, this classification can be thought of as the “original”.

I can’t speak/write Chinese, but since this is a Japanese tea blog, let me go ahead and write each type as they do in Japan: 緑茶 (ryokucha, green tea), 紅茶 (koucha, red tea), 青茶 (seicha/aocha, blue tea), 白茶 (hakucha/shirocha, white tea), 黄茶 (kicha, yellow tea), and 黒茶 (kokucha/kurocha, black tea).

This is the tea that we call black tea. If you’ve ever drank iced tea before, then you’ve surely tried this type of tea.

I haven’t looked up the details, but it seems that the British made a translating error early on when trading with China, and that’s why we know it as black tea, instead of red.

Occasionally the term “red tea” is used when referring to rooibos tea, which isn’t really a tea, but rather a tisane made from a plant cultivated in South Africa.

Both in the US and Japan this is better known as oolong. It’s popular in Japan, there’s even bottled oolong for sale in vending machines.

But why is it called “blue tea”? It certainly doesn’t look blue at all.

The reason is that in ancient Asia, both green and blue where thought of as being the same color! Now there are modern words for green and blue, respectively, but back in the time this tea was named, the meaning was a different tone of green, kind of like teal.

The Asian black tea refers to post-fermented tea, which can also be called dark tea.

The most famous example is pu-erh tea. In Japan it has a similar name: pu-arucha (プーアル茶).

What’s your favorite color? You can easily tell what’s mine 🙂