This was the last day of the World Tea Expo.

The previous days I had done a good job at visiting the tea companies on my list. That meant that I wasn’t in a hurry.

I wanted to taste Korean tea for the first time. 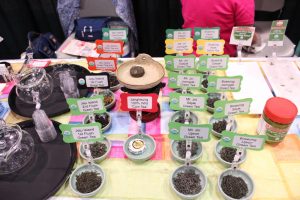 At Teas Unique I met Page and Jeanne Kaufman, and they let me taste their Korean oolong and a coin tea.

I don’t know much about the coin tea, except that it is compressed and aged.

Both teas had a good flavor.

This company is actually located in the US, I was very surprised because Korean tea is rare. 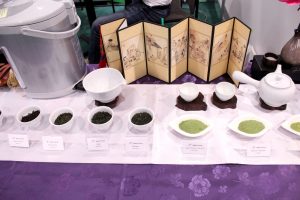 I passed by another Korean tea company, Vision Korea.

They were busy, so all I did was take the picture for you to see.

Their teas come from Jeju island.

I still hadn’t tried a Korean green tea, however. 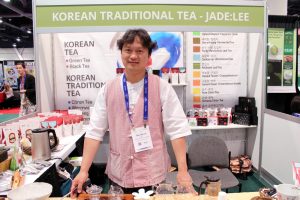 But my luck changed when I met Jiung Chang, CEO of Jade: Lee.

He prepared a sejak from Hadong county.

I thought that it tasted like both Japanese and Chinese green tea. 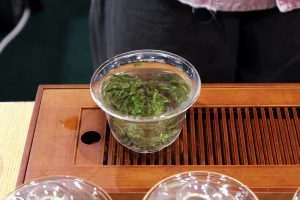 It was savory like a Japanese tea. But it wasn’t as vegetal, so in that sense it was a bit like Chinese tea.

The tea leaves were delicate and beautiful.

I was glad that I tried this tea! 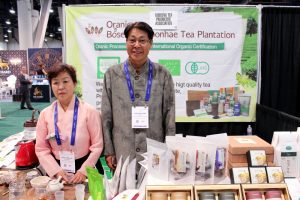 There I tasted a Korean black tea, courtesy of Soon Geum Lee and Park Hae Jong.

Boseong county is an important producing region of Korean tea. 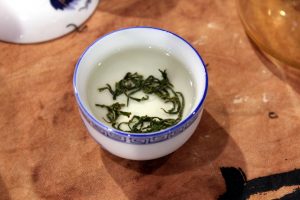 I got to try another Korean green tea, this time from a tea company called Dadorak.

Haiwon Kwon prepared it in a beautiful teacup.

This tea is also from Boseong county. 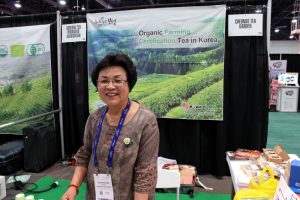 The last Korean tea company that I visited was Cheonbo Tea Garden.

I spoke with Hai Sook Cho.

They have a  brand for their black tea: Formay.

After trying it, I thought that it was very good. 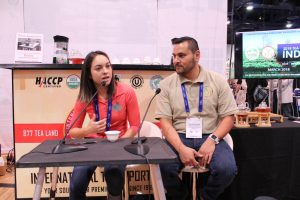 The last event I went was the reunion of Latinos at the World Tea Expo.

It was organized by Alondra de Brasilia of Alou Thé and Salvador Sosa of International Tea Importers.

The main goal was to get to know each other. Of course, the event was held in Spanish.

Many thanks to International Tea Importers for lending us the space. 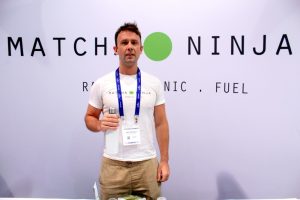 Then I visited the stand of Matcha Ninja.

This company is from Toronto and it sells organic ceremonial matcha.

It’s meant to be cold brewed, just by shaking with water. 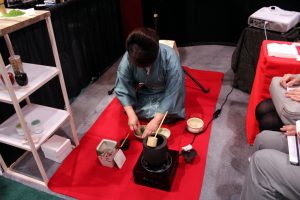 At Chazen, Rie Takeda was performing the Japanese tea ceremony.

I also had the pleasure of drinking an expertly prepared bowl of matcha. 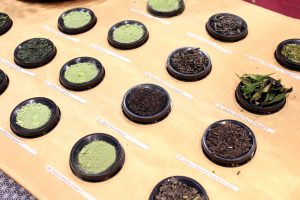 The booth next to it was Sara’s Tea Caddie.

Sara has a lot of interesting Japanese teas.

There I tasted a very luxurious kukicha which was sweet and floral.

The expo floor was about to close soon, but I still had time to visit one more tea company. 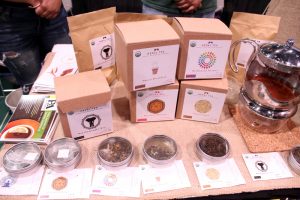 I barely know anything about Nepalese teas, but I think that they are ready to stand up in the world market.

I wish the founder Nishchal Banskota much success with his company.

This time the World Tea Expo had less Japanese companies, actually I think that the show floor had less booths than last year.

There was definitely a lot of Korean tea, which is a good thing because it’s rare to see this tea outside its own country.

Purple tea also seemed to have a good push, which hopefully favors the tea farmers of Kenya.

I saw less matcha, so it could be that the matcha craze is starting to fade.

Anyway, I certainly enjoyed it and as always I’m very thankful to be invited as a member of the press.

I made many contacts that will benefit this blog because many tea reviews, podcast interviews and the like will be coming out as a result.