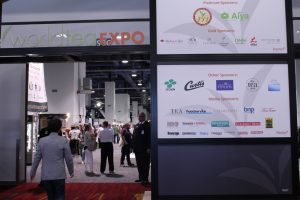 I had lunch inside the expo on the first day. There wasn’t much time to eat, because I had a very important event to attend.

The Tea Bloggers Roundtable consists of a panel of tea bloggers that answer questions from the audience.

The panelist were: Sara Shacket of Tea Happiness, Geoffrey Norman of Steep Stories, Naomi Rosen of Joy’s Teaspoon, Rachel Carter of iHeartTeas, Nicole Martin of Tea For Me Please, Linda Gaylard of The Tea Stylist, Darlene Meyers-Perry of the The Tea Lover’s Archives, and me 🙂

This was the first time that I spoke at the World Tea Expo. I never expected to have this opportunity!

It was very fun. Once it ended, it was time to head back to the exhibition floor. 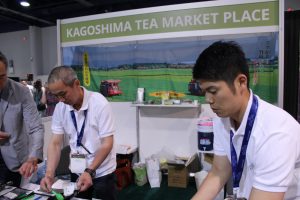 I visited the booth of Kagoshima Tea Marketplace, where I met Shuhei Hamada, who is the chief.

They offer more than 10 kinds of sencha, as well as other Japanese teas.

As a side note, this World Tea Expo had more Japanese companies compared to the last two years. 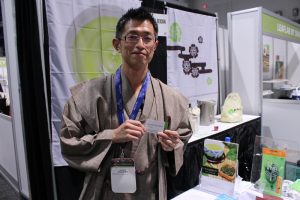 I then stopped at another company from Kagoshima prefecture, Kagoshima Seicha.

Hiroyuki Mori greeted me, and he let me take a picture of him while holding my business card 🙂

I tried one of his ice-brewed teas, an organic gyokuro from the kanayamidori cultivar. It was quite sweet and refreshing.

They also gave me a sample of their tsuyuhikari sencha. I haven’t tried a tea from this cultivar yet.

Their flagship store is Birouen, which is located in Kagoshima city. 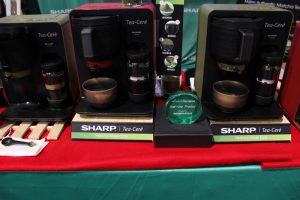 Next was Sharp. They were showcasing their matcha making appliance: the Tea-Ceré.

Besides their straight matcha, I also tried a matcha with almond milk and another with lemonade.

Sharp has teamed up with Ito En to sell tencha loose leaf tea. That way you can grind your own matcha at home and prepare it quickly with the Tea-Ceré.

I hope to buy one when my budget allows it. 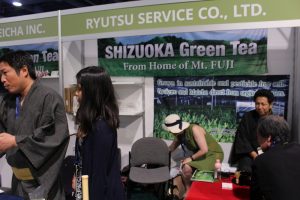 Walking by I met Elyse Petersen from Tealet, and she introduced me to Ryutsu Service.

Yoshiaki Hattori is the president of Ryutsu Service, and his company does everything starting from farming to packaging the end product.

He produces different types of teas, but his most notable product is the organic matcha that he cultivates with the help of solar panels.

Kunikazu Mochitani, the CEO of LEAF, is Hattori’s partner and he is a pioneer in using solar energy as a way to cut down the cost for farmers, since the excess energy can be sold.

Matcha has to be shaded anyway, so using solar panels is a great idea. This sounds like a good topic for a future podcast! 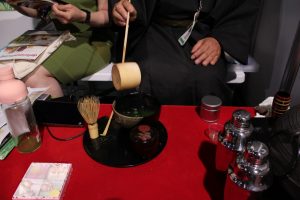 Elyse used a stone mill to grind matcha on the spot, and Mr. Hattori himself prepared it for me.

It had an excellent taste, I felt no bitterness nor astringency at all. By the way, two days later at Tealet’s office I tried another tea from him.

That time, it was prepared as koicha (a thicker style of matcha). The results were the same, something hard to achieve with a matcha prepared in a concentrated manner.

Had I drunk enough green tea until now? Absolutely not. 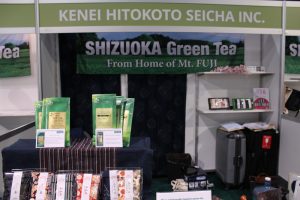 There I met Yoshie Suzuki from the sales department, and we spoke about Japanese tea for a while. 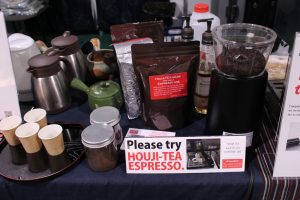 Their most memorable tea was a houjicha espresso. The houjicha is roasted in a manner similar to coffee beans, and ground in a way that it can be used for espresso machines.

That way one can have a tasty alternative to coffee but without the caffeine.