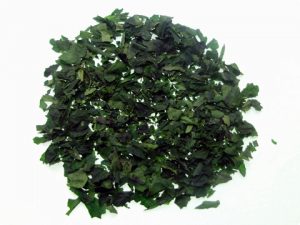 ground tea, 碾茶) is a type of Japanese green tea that is mostly used to make matcha.

It’s a high quality green tea, since the cultivation process is the same as for gyokuro.

Tencha’s main characteristic is that it comes in small, dark green flakes. Why then, does tencha mean ground tea in Japanese? Because tencha must be ground to make matcha.

How is tencha made?

Tencha is cultivated in the same way as 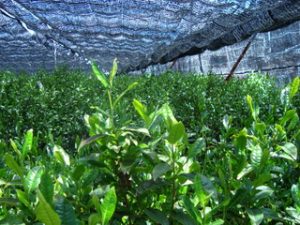 gyokuro. The tea leaves are shaded for at least 20 days before being harvested.

Once harvested, the tea leaves are steamed. Then the leaves are air-dried, destemmed and deveined.

Notice that tencha leaves do not undergo a rolling process like other Japanese green teas.

How to brew tencha

Keep in mind that tencha is a raw material for matcha and as such it is rare. It’s even hard to find tencha at stores in Japan.

Loose leaf tencha has a shape that makes it hard to brew because the flakes keep floating on top of the water, but other than that you’ll have no more problems.

You should brew it the same way as gyokuro, because they both share the same cultivation method.