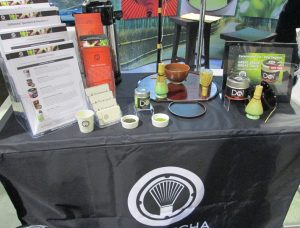 The next booth was very interesting. I had heard good things about DōMatcha but hadn’t had any contact until now.

They have a long history with Japanese tea, and although the company is from Vancouver, they sell their matcha through stores in the US too.

I believe that they will also ship from their online store in case that you don’t live in Canada. 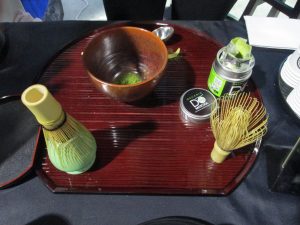 I met Gislinde Bronson from Domatcha and she let me taste the matcha, which was very good.

Surprinsingly, she told me that she was a subscriber of my newsletter! I felt very honored.

I was also given a tin of their organic ceremonial matcha, which I’ll review soon. 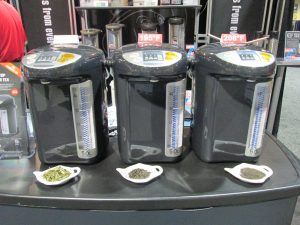 It was time to walk around again. This led me to the booth of Zojirushi.

I love their water boilers. My intention is to buy a bigger one for tea tastings.

They didn’t have a discounted price for the expo, so I figured I would buy it later on. 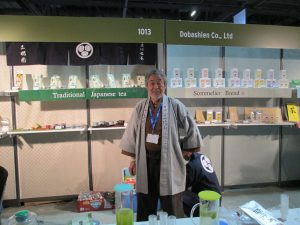 Another familiar company I visited is Dobashien.

This time they had more products on display, and again I was greeted with much hospitality.

I tasted some of what was available, and all of it was good. 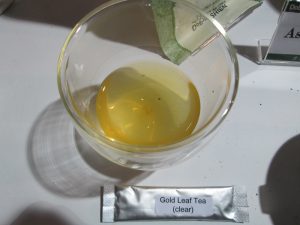 One tea that caught my eye was the gold leaf tea. There were two versions, one looked like sencha and the other one seemed like a fukamushi sencha.

They looked quite luxurious, and the best part was that they weren’t that expensive.

At Dobashien’s booth I also met Hidefumi Aoki from Be-EDGE. This company is the exclusive distributor of Dobashien in the US.

While walking nearby, I was surprised to see a stand of a tea company from my same country! 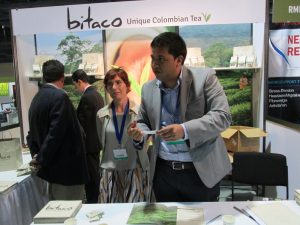 They have flavored teas with local ingredients as well as straight black and green tea. I tried their black tea and thought that it was of good quality, although as you know black tea is not my specialty.

At this point I had drank quite a lot of tea, and especially matcha. I was feeling a little tea drunk already 🙂 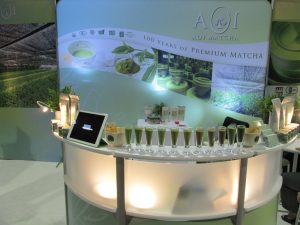 However, I couldn’t resist heading to Aoi Tea Company, in order to taste their matcha.

Their booth was beautiful, I really liked the design.

Andrew Ge, an account executive, was there to greet me. 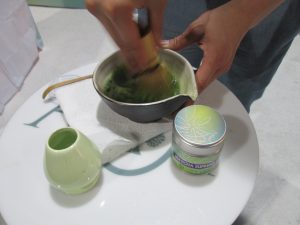 You might be asking yourself how I remember everyone’s name. Well, I just ask for their business card and keep it, in addition to taking notes every now and then.

I was offered their matcha supreme, which is their highest grade.

As expected, it was very good. You can’t go wrong with Aoi matcha. 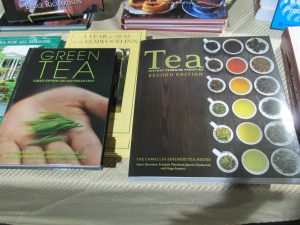 After that, I saw many tea books at a shared booth from Elmwood Inn Fine Teas/Benjamin press.

I bought both books that you can see in the picture, and of course, I’ll review them in future posts.

They look very interesting, I can’t wait to start reading them. 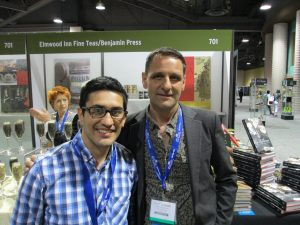 One of the authors, Kevin Gascoyne from Camellia Sinensis Tea House, was there and he signed the books for me.

We also took a picture together.

That was it for my first day at the expo. I was having such a good time that time flew by, and before I knew it the exhibition hall was about to close.

Read the third part of this series to see the other tea vendors that I visited.