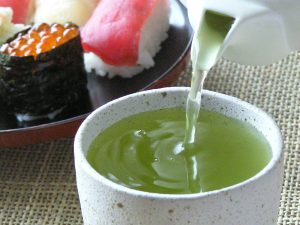 In Japan, the traditional green tea served at sushi bars is called agari (あがり). Do you know what type of Japanese green tea is it?

It’s konacha. Mainly because its low price, coupled with the fact that in most traditional Japanese restaurants tea is actually free.

Why is it called agari?

The function of green tea when eating sushi

You may also notice that green tea in sushi bars is unusually hot.

The reasoning behind it is that hot green tea is better at washing away the oils in one’s mouth after eating some types of sushi.

Sushi has a delicate flavor, and it can’t be fully tasted if one’s tongue is still oily from the last sushi eaten.

In this sense green tea acts like a cleaning agent, much like gari (marinated ginger) which is also served in sushi bars for this purpose.

Nowadays in sushi bars outside of Japan other teas are served such as sencha, bancha and even genmaicha.

If you’re making a sushi party, why not brew some agari? You can buy very economical konacha tea bags, such as these.