It’s not easy to tell what the water temperature just by looking at it.

How can you tell when the water reaches that temperature without using a thermometer and looking like a geek (like me)?

A popular technique to guess the temperature of water consists of boiling water first (100ºC, 212ºF at sea level) and each time that you pour it the temperature drops by 10 degrees celcius.

The next step is to pour that water into what’s called a yuzamashi (if you don’t have one just use another cup or any other container), that way you just reached 70ºC (158ºF). That is the temperature to brew sencha, by the way.

We need 60ºC (140ºF). To make that happen all we need to do is pour again, this time into the kyusu with the gyokuro leaves inside. 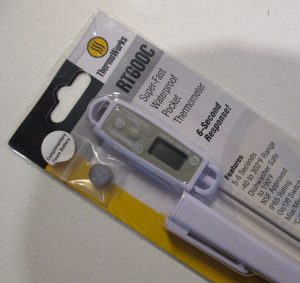 I used my newly bought digital thermometer to measure the water temperature. It displays both celcius and fahrenheit.

First I boiled water, measured its temperature, poured into a measuring cup and immediately took the temperature again.

Then I did the same thing for two more cups (Japanese yunomi, 湯呑み) and the whole process was repeated 3 times for a better sample.

Each new trial I washed the cups with cool water so as not to alter the results because of warm cups.

When taking the temperature I had the thermometer inside the water, but not touching the surface of the container to have a more accurate reading. 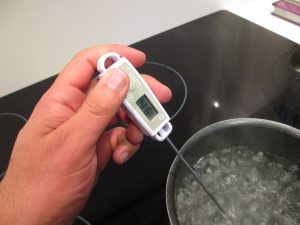 Before telling you what the results where, let me give you a little background to better understand the data.

If you want to do your own boiling point calculations, try this online calculator. You just have to find out the altitude of your city.

Also, the room temperature was 20ºC (68ºF) and there is very low humidity in this city. I’m sure there are lots of variables that affect the cooling rate of water, therefore this experiment is far from being rigorous. However, I just want to give you a general idea of how much does water cool when pouring.

As a bonus, I also took temperatures from the last cup to see how much did it cool by just letting it be idle for a minute. 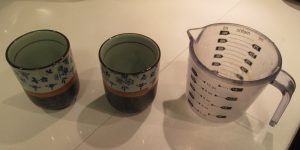 The following measurements where taken in degrees Celsius.

The first measurement is taken of water boiling in a pot, and then the temperature immediately after pouring into a cup.

Two more pourings from cup to cup were also measured.

The average drop in temperature was:

Cooling of water after 1 minute in cup

The water seemed to cool better at later pourings in the experiment. I Probably should have used the same ceramic cup instead of a plastic one (more insulation) for the first pouring, but it would have been harder to pour the boiling water from the pot into such a small cup.

Anyway, in my case I couldn’t achieve the 10ºC just by pouring immediately. This is where the other part of the experiment comes in: by waiting for some time, the water keeps cooling inside the cup. I should wait about a minute after each pouring for a better cooling.

What I learned from this experiment is that trying to achieve a specific temperature for brewing is no simple task. Nevertheless, at the very least it’s important to know the local boiling point so as to have a good starting point.

If you pause between pourings you may get closer to the 10ºC cooling, so the rule of thumb may give you a good approximation after all.