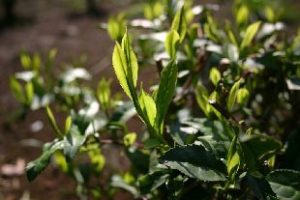 The Mushashikaori tea cultivar, meaning “Musashi aroma” is named after the Musashi province, which encompassed what is now Tokyo and Saitama prefectures.

It was registered in 1997 as Japanese tea cultivar number 46, and is geared toward sencha production.

The Japanese started a tea research institute in Taiwan. They began promoting four local tea plant varieties, and one of them was Hard Stem Red Heart (硬枝紅心, Ying Zhi Hongxin).

Have you heard of the Jin Xuan cultivar in Taiwan, that’s used in Milk Oolong? Its origin is also traced back to Hard Stem Red Heart.

The Japanese crossed the Sayamamidori cultivar with a seedling from Hard Stem Red Heart, and labeled it as 27F1-73. In 1968, they crossed that cultivar with Yabukita, and the result was Musashikaori.

Musashikaori is a late-budding cultivar. It’s harvested 2 to 4 days later than Yabukita, and has a slightly higher yield.

The mature leaves of Musashikaori are smaller than those of Yabukita, and it has a good resistance to cold weather.

When brewed, Musashikaori makes a tea that is comparable to Yabukita in quality, and has a characteristic aroma and umami flavor.