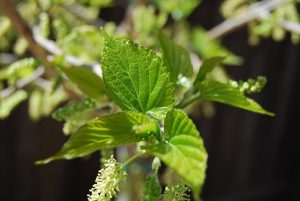 Have you ever heard about Kuwacha?

Kuwacha (桑茶, mulberry leaf tea) is a tisane made from the leaves of the mulberry plant. It has been traditionally drunk in Japan for many years because of its health benefits.

Kuwacha is found either in powder form or rolled loose-leaf. In both cases, it produces a dark green liquid when brewed and has a stronger vegetable taste than tea, but little bitterness and a faint sweetness.

The mulberry is the common name for all plants of the Morus genus.

The mulberry plant produces edible fruits, with different color and flavor depending on the specific species. It will grow into a tree if left on its own.

Mulberry leaves have one major economic impact: they are the only food source of the silk worm, Bombix mori. The silk industry in inherently tied with this plant.

In the video below you can see how mulberry leaves are harvested.

Silk has been made in China for thousands of years. The earliest evidence dates back to 4000 BC! Since the mulberry plant is fundamental for silk production, it has been used for a very long time.

Mulberry leaves are first mentioned in Shennong’s Materia Medica (神农本草经), a Chinese medicinal plant book, whose origin is believed to be the first century BC.

In that book, mulberry leaves were described as useful for relieving cough, high blood pressure and palsy. When dried in the sun, the resulting tea was called 神仙茶, which loosely translated means something like “immortal mountain wizard tea”.

Silk making reached Japan by the fourth century AD, so Japan has a long history with the mulberry plant as well. In fact, kuwacha consumption  is older than tea for the Japanese, considering that tea seeds first came to Japan during the Heian period (794 -1185 AD).

Kuwacha is high in calcium, even more so than whole milk! It also has iron, magnesium and zinc.

The most interesting compound in kuwacha is DNJ (1-Deoxynojirimycin). DNJ has been shown to inhibit intestinal glucose absorption and accelerate hepatic glucose metabolism, hence it may be helpful for people with diabetes.

Kuwacha is also caffeine free, so even children can drink it. In its powdered form it can be used for cooking, much like matcha.

It’s called kuwacha sencha because the mulberry leaf undergoes the same process as tea leaves for sencha. It has same brewing technique, you can even use a kyusu.

I made a kuwacha tea review as well, in case you want to know more about it.