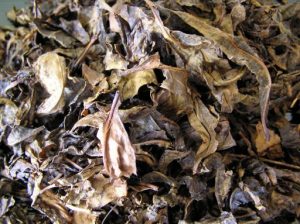 Kancha (寒茶, cold-season tea) is a type of bancha that’s picked during the winter. This tea is very rare, and is found on the prefectures of Aichi and Tokushima.

In Aichi prefecture, it’s made in the town of Asuke and it is also called asuke kancha (足助寒茶).

The other place kancha is produced is in the town of Shishikuichou, Tokushima prefecture.

The leaves of kancha are big and have a color similar to houjicha. Although not a high-quality tea, it has value because of its scarcity.

Kancha is made by individuals in a traditional way. In the old times people prepared their own tea leaves, but then Japan was flooded by large-scale sencha production from tea companies, so kancha has a nostalgic aspect to it.

How is kancha made?

Hence the tea plants are actually trees, because they aren’t trimmed down as done on tea fields.

The leaves (along with a rather big portion of the branch) are harvested by hand in the winter only. This is the main reason why it tastes different than normal bancha. It’s a bit sweet, and has a lower catechin and caffeine content.

Finally, the leaves are dried in the sun. In Shishikuichou, an extra rolling process by hand is added. This kancha is called shishikui kancha (宍喰寒茶).

How to brew kancha

From what I saw at Japanese web pages about kancha, you have to boil the leaves for as much as 15 minutes! Definitely not a tea for an impatient person.

But I have prepared it using 3 grams of tea and 120 ml (4 oz) of boiling water for 5 minutes, with good results.

Brewed kancha has a golden color and a mild sour/sweet taste.

I leave you with a video about Asuke kancha from Green Tea Newbies: