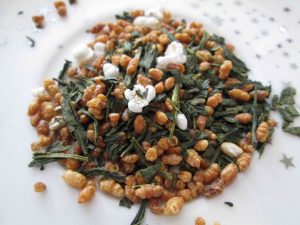 The roasted rice adds a nutty flavor and aroma that combines perfectly with green tea.

This tea is popular in Japan, where it has a long tradition.

Whenever I drink genmaicha, it brings back good memories of my life as a student in Japan.

I’ve always wondered if it was possible to roast my own rice so that I could blend it with green tea and make my own genmaicha. In this article I’ll share with you how to best go about making genmaicha at home.

I first searched online for a recipe, but most of the information available was pretty lame.

The first mistake I noticed was that some people used brown rice. Genmai (玄米) does mean brown rice in Japanese, but in genmaicha the rice used is white roasted rice.

Sometimes people also refer to it as toasted rice. For the rest of this article I’ll just call it genmai as the Japanese do.

There are two types of rice that can be used: mochi rice and Japanese rice (uruchimai). Mochi rice yields a better genmai but since it’s expensive and harder to get, I’ll use Japanese rice. You can order it from amazon here (affiliate link) if it’s not available near you.

I also want to make genmai with methods available in the kitchen. When I looked at sites about how puffed rice was made (because it looks similar to genmai), I found that the process involves great pressure.

Other more traditional recipes called for the use of hot sand, or frying in oil. High pressure and hot sand don’t look safe to me so I discarded those. Frying in oil would ruin the taste of genmaicha, in my opinion, so I’ll refrain from doing that too.

I found brief descriptions in a couple of Japanese genmaicha companies saying that the process for genmai production involved soaking, steaming, drying and roasting. No temperatures, times or any other workable measurements are given.

Another discovery was a very thorough article by Dave Arnold about puffed snacks from the Cooking Issues blog: “Making puffs is as simple as: over-cook, dehydrate, and fry.”

Dave also states that the moisture content should be about 12%. The problem with that article is that he used a dehydrator, and he fries the snacks at the end. However, he says one can use also use an oven for drying and a microwave for puffing.

I followed different recipes in order to test them:

1. Roasting the rice in a pan 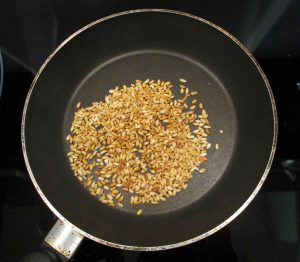 I saw various articles with this simple recipe. Whoever tells you that this is the method to make genmai probably never drank genmaicha before!

The result doesn’t look like genmai at all and the rice is very hard, no puffing at all.

Don’t even bother trying this method.

2. Soaking the rice before roasting 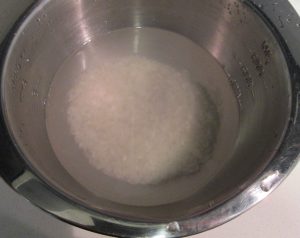 In this attempt, I soaked the rice for 2 hours. Notice how the rice grains become clear.

This way they have some moisture to help them puff.

Next, I roasted the soaked rice. If I used high heat (and this goes for all the recipes), the rice had the tendency to quickly burn. 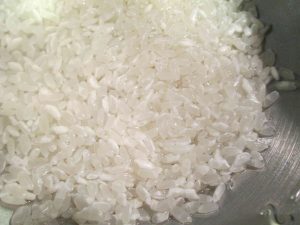 So I used medium heat for some time until it looked about right. This takes less than 5 minutes.

Be careful because once the rice starts to turn brown it will burn easily. It happened to me 3 times! 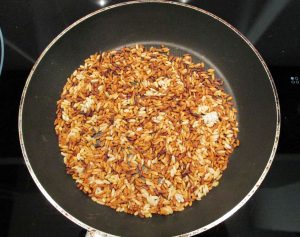 The texture looked better than in recipe 1 but it was still too hard.

Real genmaicha should be crunchy so that you can easily chew it.

I actually like to eat some of it after drinking the tea. 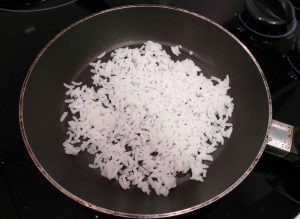 This recipe involves steaming. After soaking the rice as in recipe #2 I also rinsed it until the water was clear, just like when cooking normal rice.

I decided to use a rice cooker and cook the rice using the standard measurement of water per cup of rice as indicated by my rice cooker.

Once it was done cooking, I didn’t open it for 15 minutes so that it steamed some more. Then I would let the rice cool, because while it’s still hot it releases too much moisture. 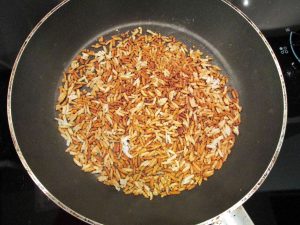 Finally, I roasted it at medium heat. The result was softer than recipe #2 but it still doesn’t look as puffy as real genmai.

Flavorwise I guess it kind of passes, though. I suppose you could actually use this recipe if you aren’t too picky 🙂 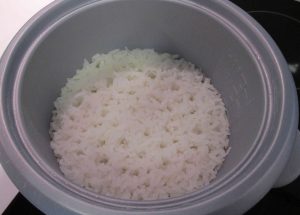 According to Dave, to ensure that the moisture content is right, one has to over-cook first.

I did that by adding twice as much water to the rice cooker. The rice comes out super soft and sticky.

I allowed it to cool before placing it in a silicone baking sheet. Then I placed it in the oven at 135 °F (57 °C) for two hours, with the oven door a bit open. 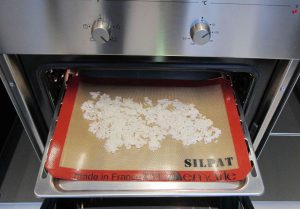 The idea here is just to dry it, not cook or burn it.

After the 2 hours, turn off the oven and leave it to cool overnight. The next day I found that the rice had indeed dried, but not evenly 🙁 Perhaps because some rice grains were on top of each other? 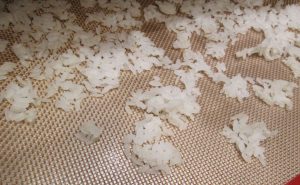 The rice grains that looked good had a plastic, rubbery texture (unlike normal cooked rice which is soft) and the outside was a bit hard.

I guess that they had the right moisture content, it’s hard to tell.

Many rice grains had stuck to each other. This was annoying because I had to manually separate them to continue the process! 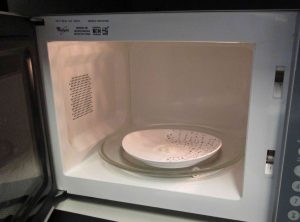 I then tried using the microwave, in order to speed things up. 2 minutes for a small amount of rice. If I had used more rice probably the time would be longer.

Since the rice wasn’t evenly dry, not all of them puffed. 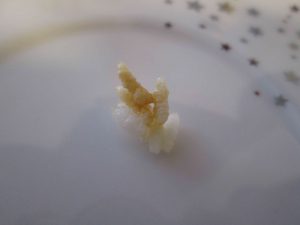 The ones that did had a good texture (small bumps similar to commercial genmai), the crunchiness was good but the color was a bit whitish.

I liked this batch in terms of flavor, it was a good quality overall. 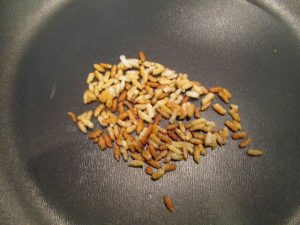 But the batch that I roasted in a pan was the best of them all, although I still had the problem of the unevenly-dried rice.

It’s not exactly like the genmai found in genmaicha but it’s pretty close.

Mine looked longer and had a slightly different color but the crunchiness and taste were not so far off. 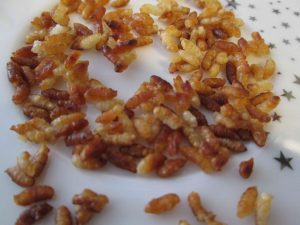 By the way, in none of the methods above did the rice fully pop into what looks like popcorn. To me that was okay because I prefer just the genmai. 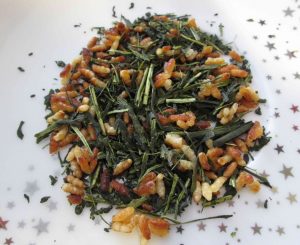 Finally I mixed my homemade genmai with loose sencha leaves and my genmaicha was completed!

I guess I can’t really compare it in a fair way because I used tea leaves from a high-quality sencha. I tried it and it was great!

I also made enough to give away as gifts 😉 The added value of having roasted your own genmai is definitely worth it, although the process probably needs some more adjustments.

I encourage you to try making your own roasted rice. Please write about it in the comments to share your experience.