This was the final day of the tea tour. Time flies when you’re having fun.

I felt a bit sad because the time spent together with the other press members and the JETRO staff would come to and end.

Our first stop was a tea store. 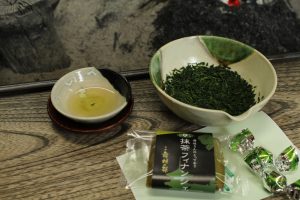 The president Masayasu Tamiya prepared a gyokuro for us, and gave us some sweets to have with it. It was definitely a high quality gyokuro, I liked it a lot.

He talked to us about gyokuro. It’s the store’s specialty.

Later on the international sales advisor Ralph Faerber joined us and we had a short chat about tea. 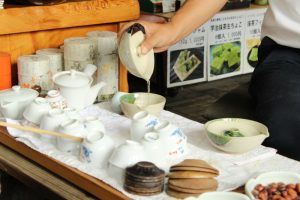 There were many interesting things at the store. I bought a set of five wooden tea coasters decorated with golden laquer.

Of all the teaware that I have, the only thing I was missing were authentic Japanese tea coasters.

I loved their shiboridashi tea pot, you can see it in the picture I took. But I couldn’t afford it, so I’ll add it to my wish list for now. 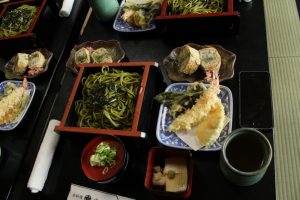 We went to Uji city for more tea tourism.

The restaurant is right next to Uji river, so the view is really nice. The food is delicious, and since it’s in Uji there’s green tea in many of the dishes. 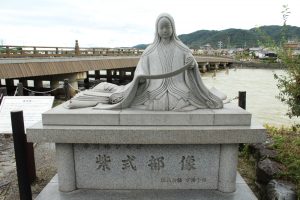 Right next to the restaurant there’s the statue of Murasaki Shikibu, author of the Tale of Genji. She’s perhaps Japan’s most famous novelist.

We can also see the Uji bridge from there. Besides appearing in the Tale of Genji, it has been the place for more than three battles, and it was the first stage of the annual journey to present shincha to the emperor during the Edo period.

Ironically, the Uji tea festival that also takes place at Uji bridge would happen a few days later (fist Sunday of October) but we wouldn’t be there anymore. Water is drawn from a top the bridge and it is taken to a temple to prepare the tea.

I forgot to take a picture of it, but one interesting thing about Uji bridge is that at both sides of the pedestrian path there is a row of tea plants. 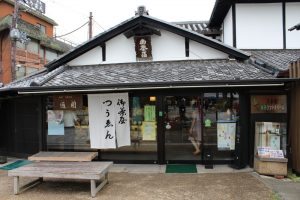 Right after crossing the Uji bridge, we arrived to the Tsuen Tea House (通円茶屋).

Its history dates back to the year 1160 when a retired samurai decided to setup his residence near the Uji bridge.

This makes it the oldest tea house in Japan, and probably one of the oldest in the world.

Tsuen’s descendants started to sell tea to people that crossed the bridge, and eventually it led to the establishment of a formal tea house. The present building was built in the 17th century, in the same place where the old one existed. 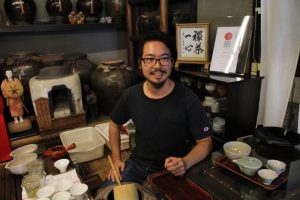 Yusuke Tsuen (祐介通円) is the 24th generation owner of the tea house.

I didn’t have the time to talk to him, but I was able to take a picture.

At Tsuen you can buy tea and teaware. You can also sit to enjoy tea and sweets.

We crossed the bridge again because we were going to Byōdōin (平等院) a famous temple in Japan.

It appears in the 10 yen coin, and the phoenix from the temple appears on the 10,000 yen bill. So this temple is a must-see in Uji city. 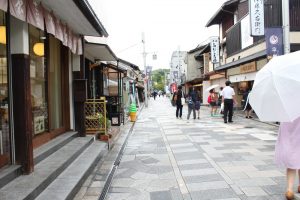 The path leading to the temple is named Byōdōin Omotesando.

This street is also a great place for tea tourists. There are tea shops, souvenir shops, and places to eat that use green tea as an ingredient. 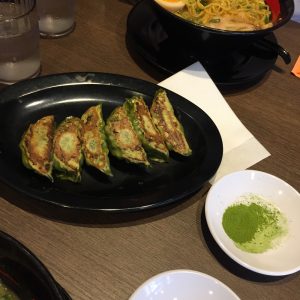 You can eat things such as green tea ice cream, green tea donuts, green tea shaved ice, green tea dango, matcha gyozas, and a large assortment of traditional sweets to have with tea.

I could have stayed here all day!

I bought some goods to take home: a matcha curry, a matcha liquour with plum juice, and two teas as gifts. 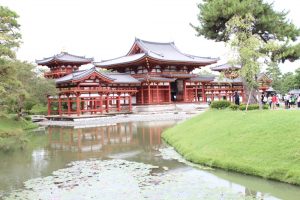 Byōdōin was built in the year 1052. It’s most important building is the Phoenix Hall (鳳凰堂), which houses a large Amida Buddha statue.

There’s also a museum where many national treasures are displayed. 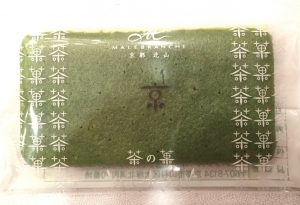 When we arrived to the hotel we were given a sample of a a high end matcha sweet: Cha no Ka (茶の菓), made by Malebranche.

It’s made with Uji tea and it is only available in Kyoto.

The sweets are gluten free, have chocolate in the center, and are made with high quality koicha. They are definitely delicious and make a good gift. 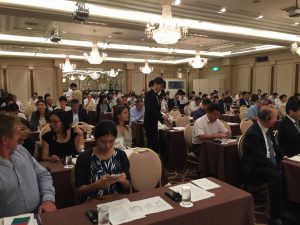 We participated in the Uji Tea Symposium at the Kyoto Century Hotel.

There was a presentation by JETRO, and we were also speakers and panelists for a round of questions.

I actually delivered a speech to 120 people of the Uji tea industry! I felt a bit scared because it was the first time that I spoke to so many people.

My topic was the state of the market for tea in Colombia, and South America as a whole. Since its a place that many Japanese people don’t know about, it was probably a novel thing for them to hear.

Overall I must say that this was the best tea tour that I have ever done. I want to thank JETRO again for their invitation.

If these posts sparked an interest in you to go to the Uji region as a tea tourist, then my job is complete.