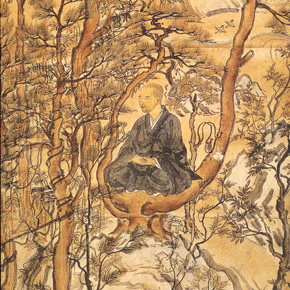 “Shounin” is a title, which can be translated as “high priest”.

Myoue is remembered for popularizing the Kegon school of Buddhism (華厳宗), and for keeping a journal of his dreams for over 40 years.

In addition, he also played a role in the history of Japanese tea, as we will see next.

Myoue was born in January 8th of 1173, in what is now Wakayama prefecture.

Both of his parents died in 1180 while he was still a child. First it was his mother due to an illness, and several months later his father passed away in a battle.

An aunt took care of him, and later on when he was 9 years old he started his Buddhist studies.

His first teacher was his uncle Joukaku, who was a Shingon Buddhist priest. When Myoue was 16, he became the pupil of Mongaku, who was also Joukaku’s teacher.

Myoue then traveled to Toudaiji temple in Nara, where he learned the Kegon school of Buddhism under Shousen’s guidance.

Furthermore, he also learned about Zen from Eisai. They became friends from there on.

It was there in Kousanji where Myoue was given tea seeds as a gift from Eisai, who had brought them from China.

Myoue not only planted the tea seeds near the temple. He became a regular tea drinker and encouraged other monks to do the same, because tea helps to avoid falling asleep while meditating.

This was how tea begun to spread around Kyoto, especially in the region of Uji. In fact, tea from Toganoo became known as honcha (本茶), meaning “real tea”. All other tea cultivated somewhere else was referred to as hicha (非茶), “false tea”.

As time passed by, it was the tea from Uji that took the title of honcha. It’s the most prestigious tea growing region in Japan.

At Kousanji temple the tea field remains, and it is still harvested every year in mid May.

Every 8th of November, there is a memorial ceremony where the tea industry association of Uji brings shincha to the temple.