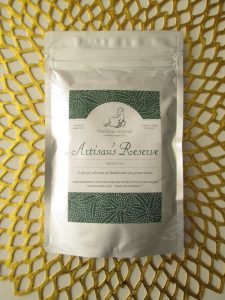 Artisan’s Reserve is one of the top teas from Mellow Monk.

It’s a blend of shaded and unshaded tamaryokucha, which are also deep steamed (fukamushicha). Very unique.

The first thing I did after opening the resealable bag was to smell the leaves.

I was surprised because it wasn’t grassy like most Japanese green teas, I felt a creamy and slightly sweet aroma.

As you can see in the closeup picture that I took, the leaves are somewhat curly and with some broken bits. This is certainly as a result of the deep steaming, which makes leaves more brittle.

Time for a tasting 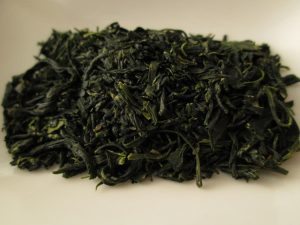 I’m not using the brewing guidelines indicated in the package, because I want to be able to compare all similar teas in a fair way.

This one was a little difficult in the sense that it’s a blend.

What I did was brew it like a tamaryokucha, 4 grams of leaves with 60 ml (2 oz) of water and with a one minute infusion time.

The color was a clear yellow with a light green tone. This was also unexpected, since deep steamed teas usually make a dark green liquid. However, judging from the color in Mellow Monk’s website, it looks like I’m in the right track.

The brewed tea has now a vegetal aroma. I tasted it and it had the characteristic flavor of a tea from the first flush. 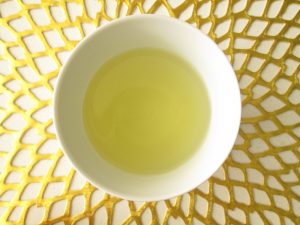 There’s also a faint sweetness, and astringency and bitterness are very low. Again, it’s different from the usual deep steamed tea, but in a good way.

I can’t describe the aftertaste, except that it’s pleasant.

Very well, let’s go for another infusion. You can steep this tea three times.

I used the same settings as in the first infusion. This time the color became a little darker, and the bitterness and astringency increased a bit. The aroma is about the same.

The taste was good too, there wasn’t a big difference from the first steeping.

The teas of Mellow Monk that I’ve reviewed have all been great, and this one keeps the bar high. I have no complaints.