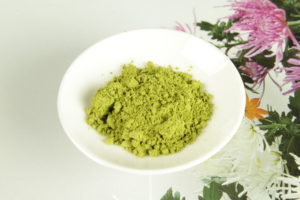 One of the most interesting things about the benifuuki tea cultivar is that when it’s processed as a green tea, it has a high content of methylated catechins.

This compound has been shown to relieve allergy symptoms.

That has been the main reason why powdered benifuuki green tea has become popular in Japan.

Thanks to www.japanesegreenteain.com I received a complete pack of benifuuki green tea powder.

Since I also suffer from allergies, I’ll tell you about my experience with this tea.

The recommendations are to drink this tea daily, and for an extended period of time. I have been drinking it daily for a month.

At least 3 grams a day would be ideal, but that’s where I find it somewhat inconvenient.

Normally, one should serve it with about 120 ml (4 oz) of hot water and drink it four times a day.

Anyway, the powder has a fresh aroma, although it has much less sweetness and overall depth than a matcha.

Once prepared it appears to be a very mild tea. It’s not bad.

Most people would find it easy to drink. It isn’t bitter nor astringent. So far so good.

I drink matcha every morning, so decided to kill two birds with one stone and drink this tea as a matcha as well. With 1.5 grams per matcha, I would only need to take it twice a day.

Perhaps the taste would be bolder that way also.

Benifuuki powder prepared as a matcha 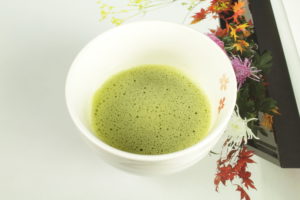 It didn’t foam so easily, as you can see in the picture.

Both the appearance and taste remind me of a culinary grade matcha.

There is a noticeable astringency and bitterness. The aftertaste feels very dry, and there isn’t much sweetness at all.

In conclusion, preparing it as a matcha might not be such a good idea after all. But if you already drink culinary matcha daily, the substitution would be an easy one.

I kept drinking it that way for a full month to see if my allergy symptoms would decrease.

I found that they were reduced, but not eliminated. For a person like me, it was a good outcome because I have allergic episodes each week.

I’m left with mixed feelings about this tea. While it has a positive effect regarding health, having to drink it daily as a medicine and at the right dose sort of takes the joy out of drinking green tea.

For casual tea drinkers with allergies, this tea can be a good choice. But in my case, I like to drink different types of green tea each day.

Another option would be to use it for culinary purposes and thus consume the daily dose in a different form, but I didn’t go that far.

Still, this cultivar isn’t so common, so you might want to give it a try.