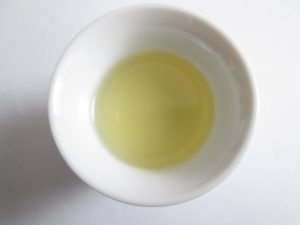 As you know, gyokuro is one of the most expensive Japanese teas.

How can you make sure that you’re buying the best gyokuro for your money?

At the very least, your tea vendor should tell you where his gyokuro comes from. If it’s not stated, then it’s either blended from different regions, or it could even be made outside of Japan (this happens more often than you think).

This is not to say that gyokuro coming from other places isn’t good. Nevertheless, if it comes from the three regions mentioned above, it’s probably a safe bet.

Gyokuro leaves are finely rolled into pointy needles. You can easily tell the difference between gyokuro and bancha, because bancha has big, course leaves.

Another aspect is that gyokuro leaves are deep-green in color, and glossy.

You’ll never see any twigs in a good gyokuro, and there should be very few broken leaves. Too much broken leaves means that either the gyokuro has become stale (losing all its humidity and becoming more brittle than normal), or it has been mishandled.

Regarding the liquor, I don’t think you can tell what the quality is by just looking at the liquid’s color. As long as it’s nothing too outside the norm, it’s better to judge it by its taste instead.

Old gyokuro will lose most of its aroma, but this isn’t easy to tell unless you’ve been doing it for a while.

I don’t know how to describe it well, but the difference between a good gyokuro and a regular one is very apparent when you smell the leaves. Good gyokuro has a richer, more complex smell to it.

It’s best if you taste the tea before you buy it, if possible. You may also order a sample first, in case it’s an online store.

Assuming you’re brewing it right, look for slight sweetness,  few astringency, very low bitterness, and a savory, refreshing taste. If you have drank gyokuro before, it’s very unlikely that you can confuse it with another type of tea, its taste is quite unique.

Stale gyokuro still tastes similar, but it loses some of its flavor. I have a package of gyokuro that is about 5 years old, because I foolishly kept it for special occasions and forgot about it.

I found that it still has some life in it, maybe because where I live there’s very little humidity and a cool weather. But lately that I’ve been trying newer (and better) ones, I’ve noticed the difference.

Of course, good packaging and proper storing are key in keeping the gyokuro in good conditions. I’m not a huge fan of buying from tea stores that keep their teas in huge jars (as opposed to individually sealed packages) because you have no idea how long has it been kept there, and the constant opening of the lid makes more oxygen come into contact with the leaves than usual, degrading the green tea quicker.

Finally, use price as a general indicator. However, don’t think that the higher the cost the better the tea. The best gyokuro for you is the one that you like the most.