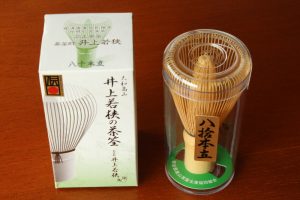 Chances are that if you own a chasen (tea whisk), it comes from China.

They are much cheaper so they easily outsell Japanese ones.

I must admit that I also use a Chinese one, so imagine my surprise when I received an authentic Takayama chasen from Ocha & Co,  made by a master craftsman.

Takayama (高山), in Ikoma city (生駒市), Nara prefecture, is the most famous place for chasen in Japan. About 90% of all Japanese tea whisks are made in that area.

With a history of 500 years, the chasen from Takayama is the result of a craft handed down generation by generation.

Inoue Wakasa has been officially recognized by the Ministry of Economy, Trade and Industry (経済産業大臣) as a master traditional craftsman. 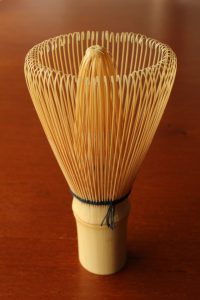 I have never owned a Takayama chasen. I’ll treasure it as a work of art, which indeed it is.

I haven’t put that claim to the test, but I have found it to be true regarding teaware.