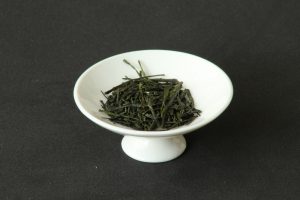 I received this rare Japanese tea from Cha Doraku, a tea company located in Canada.

It was made in Iruma, Saitama prefecture.

Because this tea is lightly oxidized, sort of like a white tea, it has a different flavor and aroma profile than the standard Japanese green tea. To learn more about the ichou process, check out the podcast episode where I interview Shiho from Cha Doraku.

Now that I introduced this tea, let’s go ahead and try it.

I placed my nose right inside the packet to have a good idea of this tea’s aroma. It felt a little sweet, and not grassy like the usual sencha.

The leaves have a dark green color and are shaped into needles. They have been processed in just the right way.

The brewing instructions are a bit different in Cha Doraku’s website but I wanted to compare this tea with the average sencha.

After I served it in the cup, I smelled the wet leaves inside my kyusu and the aroma was surprisingly floral. There was also a vegetal component to it which is very common in Japanese teas. 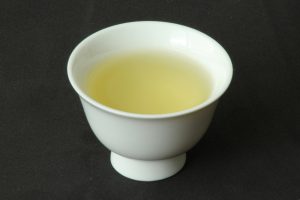 The liquor is a clear yellow. Not too strong, not too pale.

At last, the time has come to actually taste it!

What first occurred to me was that it reminded me of jasmine, which is unusual.

It has floral notes and a light astringency that makes the taste refreshing.

I used up the leaves fully by making two more infusions, they were worth the extra time.

This tea is quite special, you can notice the difference that the slight withering does to the taste and aroma of a Japanese green tea.

If interested, here’s the link to Kaori from Cha Doraku.