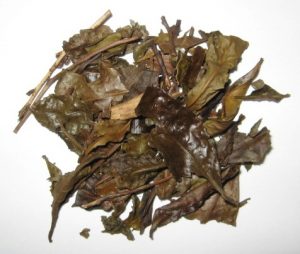 Yoshino nikkan bancha (吉野日干番茶, Yoshino sun-dried bancha) is a type of bancha made in the Yoshino region (south part of Nara prefecture).

How Yoshino nikkan bancha is made

After the bancha leaves are harvested, they are deep-steamed. Then the steamed leaves are spread on the ground and let to dry under the sun, this usually takes two days.

The last step is to roast the dried leaves. Thus, this tea can also be classified as a type of roasted green tea.

How popular is Yoshino nikkan bancha?

Although not as well-known as sencha and other common green teas, Yoshino nikkan bancha isn’t as rare as some of the other sun-dried bancha, at least in Japan.

The Ooyodo Chamber of Commerce and Industry has done a phenomenal marketing effort. Starting the Yoshino Ooyodo Nikkan Bancha Project proved to be a great idea, resulting in magazine/newspaper articles, and even appearing on different TV programs in Japan. Plus, tourism in Ooyodo town improved as well.

A great variety of recipes using powdered Yoshino nikkan bancha were created, and some restaurants in the area offer them as well. The products include ice cream, risotto, baked goods, sweets, soups and much more.

There’s a small video (32 seconds) about it, towards the end you can briefly see some of the food items.

How to brew Yoshino nikkan bancha 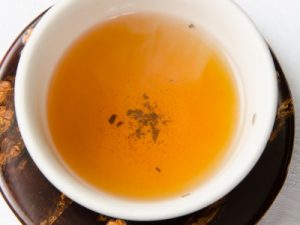 Use a rather large kyusu or dobin, because this tea leaves are big. For 10 grams of leaves, add 120 ml of boiling water and let brew for 2 minutes.

You can also make many cups of Yoshino nikkan bancha at once by placing the leaves directly in a pot and then boiling the water.

Just like normal houjicha, this tea has low astringency and bitterness. It is also low in caffeine.