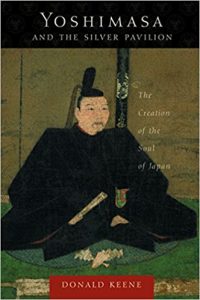 This book was recommended to me by Lochan of Jun Chiyabari.

The complete title of the book is Yoshimasa and the Silver Pavilion: The Creation of the Soul of Japan. It’s written by Donald Keene.

Ashikaga Yoshimasa (足利 義政) was the 8th shogun (military ruler of Japan). He is best known for creating the Temple of the Silver Pavilion (銀閣寺, Gingaku-ji).

Yoshimasa was a complete failure as a shogun. Many consider him the worst shogun ever!

He caused the Ōnin War because of his weakness. While Kyoto was being destroyed and famine was widespread, he would spend large sums of money for his own pleasure.

As his power waned, he effectively abandoned politics and instead went on a quest for beauty through the arts.

Much of what the Japanese consider to be at the heart of their culture was mainly shaped in this period, and Yoshimasa played a leading role.

This means that Japanese tea culture, along with many aspects of theater, poetry, and architecture flourished thanks to the most incompetent shogun!

It’s a good amount of text to read, but I didn’t find it boring because I’m very interested in Japanese history.

For the purposes of this blog, chapter 9 is very important because it’s about tea. For example Murata Jukō, the founder of the Japanese tea ceremony, is mentioned.

My understanding of Japanese tea was enriched after reading this book. Even though it doesn’t focus exclusively on tea.

The next time that I travel to Kyoto, I want to visit the Silver Pavilion to wonder at the place where Yoshimasa offered tea to his guests and the Japanese tea ceremony was developed.