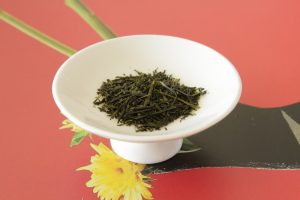 I received this sample thanks to webexpoo.com, a site where you can source Japanese products.

It’s made by Fujien. This company’s tea field is located at the base of Mount Fuji in Fuji city, Shizuoka prefecture.

This tea is very interesting because it is an aged sencha. But that’s not all, it’s actually aged in a shrine at the top of Mount Fuji!

The tea leaves are hand picked in spring, processed and then kept inside a traditional jar.

Then the jar is brought up to the Okumiya shrine and it will remain there until autumn, where it is finally opened in the ceremony known as Kuchikiri no Gi (口切の儀).

Only 5 kg of tea are aged each year.

I only received a sample, but I believe that you can purchase 80 grams of this tea and it will come inside a small jar.

Tasting a rare and spiritual tea

This is my last tea review of 2017. I chose this tea because it’s very special.

The aroma of the tea leaves inside the package feels deep. It is sweet and mellow.

There are many broken bits of leaves present. I don’t know if this happened during shipping or not.

But the tea leaves that are intact are very beautiful. They are small, thin and have a dark green color.

I looked at Fujien’s website but they didn’t have brewing instructions for this tea. So I decided to prepare it as a normal sencha. 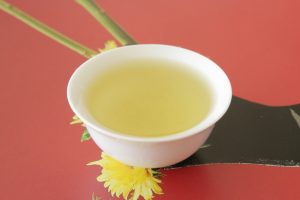 This tea’s liqour is yellow-green with some sediment. After a quick picture, I could finally taste it.

It has a strong umami flavor, which is great. There’s also a light sweetness, especially in the aftertaste.

It’s a very good tea. It feels easy to drink, without bitterness nor astringency.

For the second infusion, I played it safe by steeping for 40 seconds only. Since I had a small sample, I didn’t want to risk it.

It was a good call, because it was delicious too. The liquor became a little darker, and there was more of a vegetal side to it.

For the third infusion I halved the infusion time, so that it was only 20 seconds at the same temperature.

It felt weaker, but I liked it. It still tasted like a high quality sencha.

Reviewing this excellent tea was a marvelous way to close this year. I’m ready to start 2018 in top condition.