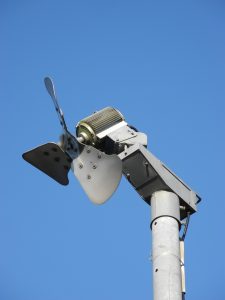 If you look at a Japanese tea field, you’ll often see what looks like tall posts with small fans on top.

Have you wondered what they are for?

The first thing that comes to mind is that maybe they are used for cooling. However, it’s the opposite. The fans are there to raise the temperature!

This device is called bousou fan (防霜ファン). As it’s name implies, this device is used to avoid frost damage in crops.

In tea fields, the idea is to protect the leaves of young shoots born in the spring. These are the highest quality tea leaves (shincha), so any damage at this point costs a lot of money.

The frost prevention fans are usually placed 3 to 5 meters (about 10 to 16 feet) high, use electric power and are slanted towards the ground. Another cool feature is that they have a thermal sensor, so they save energy by turning on only when needed.

Alright, so how does the frost protection fan work?

The science behind frost prevention fans in tea fields

Through the effect of radiative cooling, heat is radiated into space from the ground on cloudless nights. Sometimes it gets cold enough as to form ice on top of objects.

Cold air is denser than hot air, so it stays on the ground while hot air rises. In fact, air at 6 meters (19.6 feet) can be 4 to 6 degrees Celsius hotter than the temperature at ground level.

That’s where the frost prevention fan comes into play. It pushes the upper layers of hot air into the ground so that frost can’t form and damage the tea leaves.

To cover a bigger area, all you need is more fans.

As a bonus, I’m including a short a video where you can see the frost prevention fans: