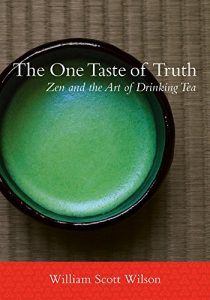 The full title of this book is The One Taste of Truth: Zen and the Art of Drinking Tea.

The author, William Scott Wilson, is a renowned translator of traditional Japanese texts.

This time he tackles the aspect of the common phrases written in hanging scrolls, which are found in tea rooms.

One of the important items in a traditional tea room for the Japanese tea ceremony is the scroll.

The text of the scroll sets the appropriate atmosphere.

For people outside Japan, it’s very hard to understand such scrolls. Obviously because of the language barrier, but even if the texts were translated it would make little sense.

This is because the cultural and philosophical background is needed.

So this books attempts to give some light on the subject by listing 109 of the most common ichigyoumono and organizing them by themes.

He also gives us the background of each, so that we can gain a better understanding.

For example, I’ll quote an excerpt of the phrase “The One Taste of Truth” (一味真, ichimishin):

Our natures are different, but the taste of tea is the same. This “one taste” is the Truth that knows no differences; it is the Buddha’s teaching of the Dharma, the Absolute.

I’m not a practicioner of neither Zen nor the tea ceremony, but I find this topic interesting.

The book leans heavily towards Zen as opposed to tea, so it may not be for every tea lover.

But if you enjoy Japanese culture in general, you’ll find that the same aspects of Zen are found everywhere: tea, martial arts, calligraphy, etc.

I found it a bit harder to read than the average tea book, but enjoyed it nevertheless.

The best parts involve stories of priests, tea masters and even warriors.

Hopefully, the next time I see one such scroll at a tea room I can know more or less what’s going on 🙂

Here’s the link to the book’s page in Amazon.