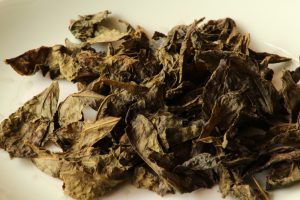 Noli Ergas from Sugimoto America gave me samples of rare Japanese teas that he found on his business trip to Japan.

The name of the company that makes this tea is Nīryokucha (新居緑茶).

They don’t have a website, so all I know is that they are located in Naga town, Tokushima prefecture.

Since Awa bancha comes from Tokushima prefecture, this must be the real deal!

The tea consists of unrolled leaves, with a lighter color than other Japanese dark teas that I’ve seen.

I smelled the package and it has an aroma of plum, very similar to Ishizuchi kurocha. The difference is that it has a sour tone instead of a sweet one.

The instructions say that 5 grams of tea should be used with one liter of boiling water, and brew for 3 minutes.

The wet leaves have the same aroma as when they were dry. It’s just more intense. 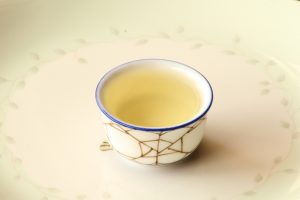 After serving, I could see that the liquor is yellow, with a bit of green. It’s aroma is the same as the wet leaves.

Now let’s see how it tastes.

It definitely has a sour flavor. Not intense, but stronger that other Japanese teas fermented with lactic acid bacteria.

I felt that it was very refreshing, but the flavor isn’t vegetal.

The astringency and bitterness aren’t easily detectable, it’s not hard to drink.

If you’re into traditional Chinese dark teas such as pu-erh, you’ll find that pickled teas taste entirely different. There’s not much similarity.

Now that I’ve tried Japanese pickled teas, I can tell you what my favorite is.

I choose goishicha, mainly because of its unique aroma. I could just smell it all day!