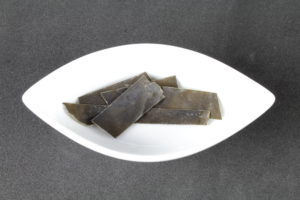 It shouldn’t be confused with kombucha, which is a fermented beverage that has become very popular.

I think that konbucha is very interesting for Japanese green tea lovers, because it has a powerful umami taste (konbu is used for making Japanese soup stock) and also because of its marine quality.

I’ve only tried konbucha once, while I lived in Japan. I don’t remember well but it was salty and tasted like a broth.

So now I’m going to taste it again and show you how to prepare it.

First I bought a packet of dried konbu, here’s the link in Amazon. I think that you will find it for sure in an Asian supermarket.

It’s also common in Japan to find konbu in powdered form, but it has other ingredients added.

After opening the package, I felt a wonderful marine and brothy aroma.

Then I used scissors to cut small strips of konbu, I took the picture as seen above.

I used my yunomi (Japanese teacup) that holds 120 ml, and two small strips no longer than 2 inches.

Alternatively, you can cut into 2 cm (about an inch) square pieces, or shred the pieces even more. 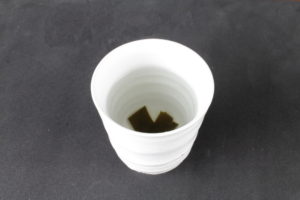 Make sure not to add too much konbu, you just need a small amount.

The Japanese will add a pickled plum (umeboshi) or some salt, but I decided to first taste it without extra flavors.

It actually doesn’t have much noticeable taste. The liquid feels dense.

So I added some salt, and now it does feel like a broth. The umami flavor is quite strong.

But konbucha isn’t as enjoyable as a Japanese green tea, in my opinion.

While it has a lot of umami, it’s missing the green and fresh tones, as well as the light sweetness.

One use for konbu that I can think of for tea drinkers, is to add some in order to improve a tea’s umami flavor.

I did just that with a bancha.

It had a pleasant taste, but I think that I might have added too much konbu. It threw off the balance of the overall flavor.