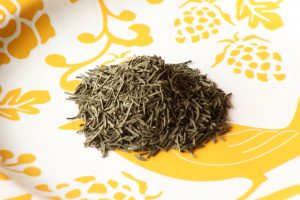 Richard Grey, the founder of Grey’s Teas, contacted me to review some of his teas.

I was curious about the kokeicha, since I had never tasted this type of tea.

It’s not everyday that I get to taste a loose leaf tea in which the tea leaves aren’t real leaves!

This is so because kokeicha is made with extruded pieces of a powdered tea made into a paste. Instead of leaves, we have little pieces of tea.

Grey’s Teas is located in the UK, and they ship internationally.

According the website, Richard is a descendant of the First Earl Grey. Note that the Second Earl Grey (British Prime Minister from 1830 to 1834) had the famous Early Grey tea named after him.

This kokeicha in particular comes from Shizuoka and is made with matcha.

From afar, It seems like some type of sencha. On closer inspection, it has a grey color and is made of small rectangular pieces.

It has a faint aroma, it’s hard to tell but I found it a little vegetal with a hint of sweetness.

Once infused, the wet “leaves” have a sweet aroma and perhaps a citrus note. 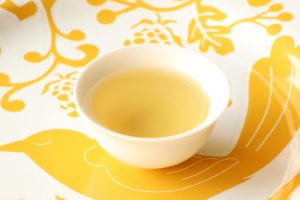 As you can see in the picture, the liquor’s color is bright yellow.

This is unexpected, since one would think that a tea made with matcha would have a green color.

Regarding taste, we have a slightly nutty tea without astringency nor bitterness. The aftertaste is dry, and I can also sense a very light sweetness.

It doesn’t taste like matcha at all. There’s no vegetal taste and not much body.

I think of it as a pleasant, everyday tea. I wouldn’t compare it to a high quality sencha, it’s more on the level of a genmaicha.

After a second infusion, it amazingly still holds its shape. The taste is quite similar as the first brew.

It’s an interesting tea, especially for Japanese green tea enthusiasts. The process to make a powdered tea into what looks like a loose leaf tea changes many aspects of it.

If you want to taste kokeicha click here for the product page in Grey’s Teas.