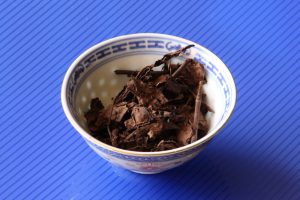 The first time I tried this tea was thanks to Geoffrey of Steep Stories. He said batabatacha was “the best tasting Japanese dark tea”.

He gave me a small sample, so I just tried it in a casual way and decided to make a proper review at a later date when I had more tea.

That time came much later, when I organized the first ever Japanese dark tea tastings in my country.

For those tastings I bought three dark teas from yunomi.life. Batabatacha was one of them.

Batabatacha in loose leaf form has an earthy, humid, and wooden aroma.

The leaves have a dark brown color and they are unrolled, although somewhat wrinkled and rough.

There are also large twigs present, I actually had to break one down into three pieces for the picture.

According to the package, with 6 grams of leaves and 1 liter of water, all one needs to do is boil the tea leaves for more than 10 minutes.

My first attempt failed, I left it unattended and didn’t lower the heat. Most of the tea evaporated, and what was left had a heavily concentrated flavor.

So if you’re leaving it for a long time, add some water when appropriate and turn the heat down.

After trying again, the result was a dark brown liquor.

I used a Chinese teacup that I found at my mother’s apartment.

I have no idea why she has so much teaware, she doesn’t drink much tea. Can you believe that she even has a Yixing teapot?

The reason I chose that cup is because this tea tastes like a Chinese dark tea, according to what I’ve seen online.

So then I added a pinch of salt as the tradition goes, and whisked the tea. Well, the cup was too small, so I had to whisk the tea in a matcha bowl and then transfer it back to the cup. 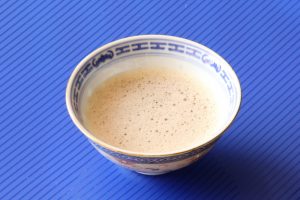 The tea did foam, although some of it was lost while I poured into the cup and proceeded to take the picture.

I’m not a big fan of salt, it’s probably my least favorite flavor. The tea felt too salty for my taste.

Part two of the tasting

There’s another way that the tea can be prepared called sancha (散茶). It’s just infusing without adding salt or whisking.

I boiled the tea leaves for about 10 minutes, used no salt, and it turns out that salt is important in order to get a good layer of foam.

Anyway, even without the foam batabatacha tastes good.

The wet leaves smell like moss, and a forest after a rainy day.

Batabatacha has some sweetness. I could also taste the wood, it feels damp.

There’s a lasting aftertaste, I think that in it there is a note of mint. It’s not bitter nor astringent at all.

Geoffrey was right, of all the Japanese dark teas that I’ve tasted, I like this one the best. In terms of aroma I prefer goishicha, but in flavor batabatacha wins by far.

I’m not very knowledgeable of Chinese dark teas, so I can’t accurately tell you how it compares. It’s just an enjoyable tea.

Conclusion: a good addition to the dark tea enthusiast’s collection.

You can buy this tea from its product page.